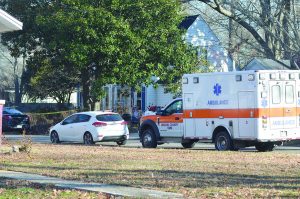 MILAN POLICE set up a perimeter around a home on Forest Street where two people were found dead Thursday morning in what is believed to be a murder-suicide. The home, located at 2106 Forest Street, is owned by Steve and Susan Short. Photo by Victor Parkins.

Milan Police found two people dead Thursday morning on Forest Street about 8:30 a.m. in what is believed to be a murder-suicide.

Chief Bobby Sellers said the department received a call from a concerned family member at 8:18 a.m. When officers arrived for a welfare check, the front door was ajar and they found the victims deceased in an upstairs bedroom.

The home, located at 2106 Forest Street, is owned by Steve and Susan Short.

Chief Sellers said the bodies were sent for autopsies to be sure of the cause of death.

“We’re confident this is a murder-suicide but we want to be thorough in our investigation,” the Chief said.