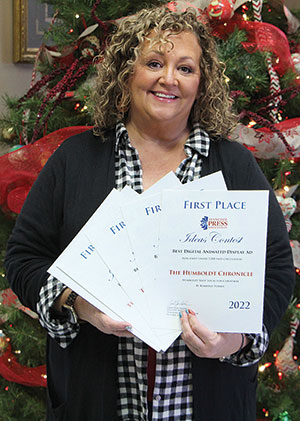 “A lot of work goes into creating strategy plans and artwork for our advertisers,” Forbes said of what brought her to enter the Ideas Contest. “I felt certain that the work we do can stand with or above the competition with the rest of Tennessee.”

The TPA Ideas contest had 487 entries in the 2022 contest, which has four circulation divisions and 41 categories. Of those 41 categories, only a handful pertained to digital marketing and GCP won the majority of those. TPA partnered with the Hoosier State Press Association for the judging, which resulted in 240 awards.

“The contest was held virtually, which made sense for a digital contest,” Forbes recalled watching the results online. “When the winners were announced and we won, I was ecstatic. I screamed every time. This confirmed we are on the right track.”

Forbes said she felt a lot of pride and was so excited to let everyone in the company know.

“We are very proud of the excellent work Kim does for the Chronicle and for Gibson County Publishing using digital media,” Humboldt Chronicle Editor Danny Wade said. “Multi-media and digital advertising is not my forte. I’m old school—growing up with a newspaper background. Kim has worked her magic to marry the two together for the betterment of the company and to benefit the advertisers.”

Forbes is like a sponge as she continues to learn every nuance of digital marketing. She watches webinars and reads articles to keep up with growing trends. She analyzes data of the digital platforms and formulates a plan, tailor made for the client.

“Our client results help me realize how important the multi-media approach is,” Forbes noted. “You find ways to continue educating local advertisers so you can make it happen more frequently.”

Forbes has already begun assembling entries for next year’s contest. She is excited and wants to continue to bring home awards for GCP.

“I’m very proud Gibson County Publishing is leading the way in combining print and digital advertising,” Forbes stated. “We want to provide our advertisers with the most current, effective methods the 21st Century has to offer.