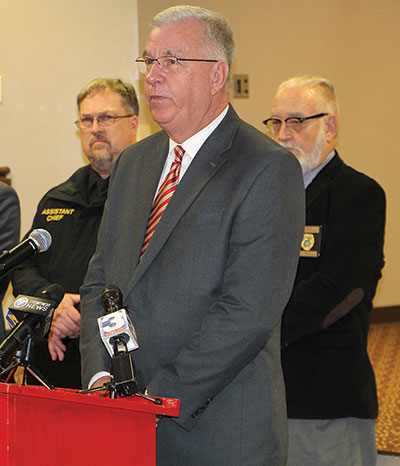 Family members of the victim of a deadly shooting have filed a lawsuit seeking compensatory, actual and punitive damages. Joe Pankey and Lamar Pankey, listed as next of kin of Justin Kevon Pankey, filed civil action lawsuit in the Circuit Court of Gibson County, Tennessee at Humboldt on November 28, 2022. Trenton attorney, Harold E. Dorsey filed the lawsuit on the plaintiff’s behalf.

One defendant listed in the case is Jadon Davon Hardiman, the alleged gunman who shot and

killed Justin Pankey in the lobby of the Thomas Ray Boykin Gym at Humboldt Jr./Sr. High School during a basketball game on November 30, 2021. Also listed as defendants are the city of Humboldt, Humboldt City Schools and Humboldt Police Department.

Joe Pankey and Lamar Pankey are suing the city of Humboldt, Humboldt City Schools and Humboldt Police Department for compensatory damages for an amount up to $700,000. They are also suing Hardiman for $5-million in actual damages and $10-million in punitive damages.

Hardiman is currently being held in the Gibson County Criminal Complex, facing two counts of murder along with other felony charges from the shooting.

When the Humboldt Chronicle asked Mayor Marvin Sikes for a statement, he replied that under advice from the attorney, he would not make a statement at this time. 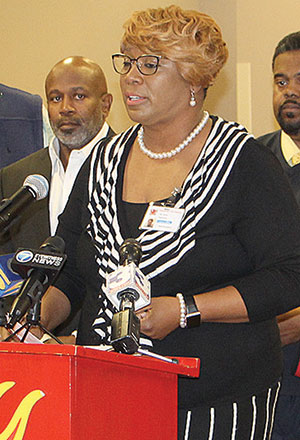 According to court documents, “On November 30, 2021, there was a high school basketball game at 2600 Viking Drive, Humboldt, Tennessee at the Humboldt Jr./Sr. High School at halftime of the boy’s game between Humboldt High School and North Side High School from Jackson, Tennessee, there was an altercation between the Plaintiff, Justin Kevon Pankey and the Defendant, Jadon Hardiman. After a brief argument, the defendant Jadon Hardiman, pulled out a gun and shot and killed the Plaintiff, Justin Kevon Pankey.

“Defendant Jadon Hardiman, then fires approximately two to three more rounds in which he hit another man at the game who was, Humboldt resident Xavier Clifton. Mr. Clifton did eventually die from a gunshot wound to the neck. Mr. Clifton was also found to be in possession of a firearm. The firearm was discovered by an EMT when Mr. Clifton’s body was being transported from the lobby of the building in question.

“Further, there were two Humboldt Police officers, Officer Roy Hudson and Officer Jhnous Long, assigned to provide security at the above mentioned basketball game. The first officer was the school resource officer, Roy Hudson, and at the time of the shooting he was located inside the gymnasium. The other officer was Patrol Officer, Jhnous Long, and he was located at the left side gymnasium door. There was a south side entrance to the building that was left totally unoccupied and unguarded.

“After the shooting and killing of the Plaintiff, Justin Kevon Pankey, the Defendant Jadon Hardiman ran out of the back or south side entrance of the building. Officer Jhnous Long gave chase and was able to apprehend the defendant,

Jadon Hardiman. The Defendant, Jadon Hardiman was then transported to the Humboldt Police Department where he was secured before eventually being taken to the Gibson County Correctional Complex.

“There were no metal detectors being utilized anywhere in the building or in the gymnasium during the game.”

“Back in August of 2020, Defendant Hardiman was shot by a known associate of the Plaintiffs named Jaquez Reed. Mr. Reed was subsequently killed in a gun fight that took place in Rancho Cucamonga, California.

“Upon information and belief, in the days leading up to the event that occurred on November 30, 2021, there was a dialogue between the Defendant Hardiman and the Plaintiff regarding a memorial that was set up on Social Media by Mr. Reed’s friends, family and associates. Upon information and belief, Defendant Hardiman made derogatory comments and insults about the late Mr. Reed and the Plaintiff took exception.

“Members of law enforcement employed by the City of Humboldt Tennessee either had knowledge or should have had knowledge about this dispute.

“Plaintiff (s) would show that surveillance video indicates that the south side entrance was abandoned by the Humboldt Police department and school officials immediately before the fatal shooting occurred.

“Plaintiff (s) would show that this act of negligence was the proximate cause of the death of the Plaintiff.”

“The killing of the Plaintiff was an intentional and pre-meditated first degree murder by the Defendant Hardiman. The results of these acts were the proximate cause of the Plaintiff(s) wrongful death.

“The deadly, intentional, and negligent acts by Mr. Hardiman caused actual damages to the Plaintiff in the amount of $5,000,000. The Plaintiffs would respectfully submit punitive damages are appropriate for Defendant Hardiman’s egregious act in the amount of $10,000,000.”

The lawsuit claims negligence on the Humboldt Police Department for not doing their duty to protect individuals attending the game.

Other claims of the lawsuit state that the city, school system and police did not provide a safe environment to all in attendance and were also negligent for leaving the south side entrance door unattended that allowed Hardiman to proceed into the facility with a handgun.

Summons were served on each of the four defendants in the case and they have 30 days from the date of being served to file an answer to the complaint.