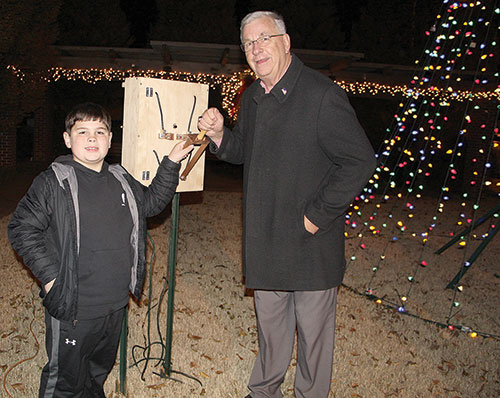 FLIPPING THE SWITCH – Humboldt Mayor Marvin Sikes had the honor of flipping the big switch to light up the downtown Christmas tree Thursday evening during Christmas on Main. Sikes’ grandson, Tanner Walker, helps his granddad out.

Humboldt rang in December with a bang last Thursday evening. Christmas on Main was back and did not disappoint for those visiting downtown Humboldt. There were carolers, shopping, snacks, hot chocolate, pictures with Santa Claus and the highlight of the night—the lighting of the downtown Christmas tree. 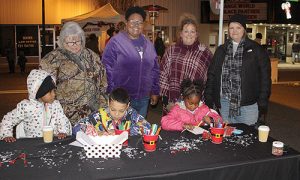 CIVIC VOLUNTEERS – Four of Humboldt’s civic clubs and a business volunteered during Christmas on Main again this year. Junior Auxiliary of Humboldt (pictured) operated the Letters to Santa booth for the kids. Others involved included the Humboldt Lions Club that offered free popcorn; Rotary Club of Humboldt assisted with the pictures with Santa booth and handed out goodie bags to all the children; Humboldt Exchange Club manned the reindeer food booth where kids made their own special recipe for Santa’s deer; and Dynamix worked the hot chocolate bar.

Things kicked off early at 4 p.m. when several downtown businesses hosted open houses until 7 p.m. The early start gave shoppers plenty of time to mark items off their Christmas lists before the celebration at 6 p.m.

The Humboldt Chamber of Commerce event was a huge success. Local civic clubs and businesses participated. Traffic on Main St. between 16th Ave. and 14th Ave. was blocked off to traffic, making for a much safer event.

City Gift, The Kandy Bank and LD2 on Strawberry Hill opened their doors to patrons looking for bargains and Christmas gifts.

Kids got their pictures made with Santa Claus for free. Rotary Club of Humboldt assisted with the photo booth 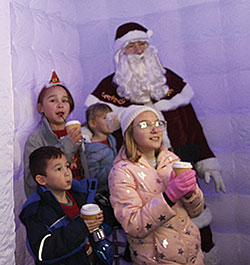 PICTURES WITH SANTA – Dozens and dozens of kids waited in line to have their pictures taken with Santa Claus in the inflatable igloo. These young tykes enjoy hot chocolate as their picture was taken.

and handed out goody bags to each child right before the picture was taken. The Humboldt Lions Club manned the popcorn tent. Junior Auxiliary of Humboldt had a station for kids to write their letters to Santa and put them in Santa’s mailbox. The Humboldt Exchange Club worked the reindeer food booth where kids got to make their own special bag of food to sprinkle on their lawns on Christmas Eve.

Dynamix was in charge of the hot chocolate station that included several add-ons to make your own special blend. Magnolia Manor had a live nativity scene on the front lawn with people and live farm animals.

For everyone’s safety, Humboldt Police Department, Humboldt Fire Department and Humboldt Area Rescue Squad was on hand to make sure everyone stayed safe and sound.

The highlight of Christmas on Main was the lighting of the downtown Christmas tree. Humboldt Mayor Marvin Sikes had the honor of flipping the switch to light up the towering 25 ft. tree at the green space on the corner of Main St. and Central Ave. Mayor Sikes spoke to the crowd right before flipping the switch. He thanked everyone for attending the big event, even on a cold night. At the end, he asked everyone to help him count down… 10, 9, 8, 7, 6, 5, 4, 3, 2, 1 and lit up the magnificent tree. Everyone cheered, and more singing and music commenced. 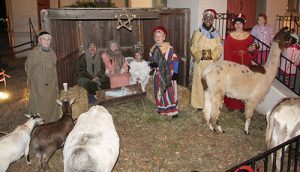 LIVE NATIVITY – Magnolia Manor had a live nativity scene on the front lawn for everyone to enjoy during Christmas on Main last Thursday evening. The recreation of the birth of Jesus included characters from the Bible—baby Jesus, Joseph and Mary, shepherds and the three wise men, along with live animals.

With the Christmas tree shining brightly, people gathered around the tree to have pictures made. Phones and cameras were flashing, taking picture after picture, creating memories that will last a lifetime.

All of this would not have been possible without the Humboldt Chamber of Commerce Executive Director Amanda Love and Events Coordinator Beth Culpepper.

This was just the beginning of kicking off the holiday weekend. Saturday from 9 a.m. until 3 p.m. a number of business around town hosted their own Christmas open houses. Jana’s Boutique, Coco Marie and OneFiftyTwo Designs opened their doors. There were special discounts, refreshments and door prizes.

Also downtown on Saturday was Christmas on Main at the Movies. Free tickets were available through the chamber to watch two movies, “The Star Movie” and “Elf” were playing on all three screens at Humboldt Plaza 3, each starting 15 minutes after the other. “The Star Movie” opened on Saturday morning followed by “Elf” that hit right after noon. Entrance was free for anyone reserving tickets through the chamber’s Facebook page.

The first few days of December are always special in Humboldt. This year was no different. It was a fantastic way to start the Christmas season with fun for kids of all ages, shopping for the adults and sleigh full of Christmas cheer for everyone. Merry Christmas!

HJSHS BAND – The Humboldt Jr./Sr. High School band performs for the crowd during Christmas on Main.

CHRISTMAS CAROLS – The SonShiners, led by Kevin Hamilton, filled the air with holiday cheer as they sang Christmas Carols during Christmas on Main last Thursday night.