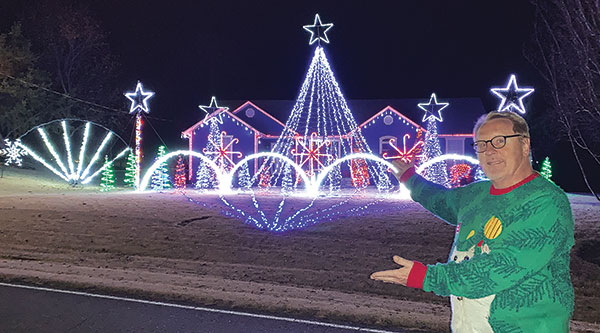 CHRISTMAS LIGHTSHOW – To say Danny Wade is a Christmas light fanatic might be an understatement. Wade puts up his computerized musical lightshow each year to bring Christmas cheer for everyone to enjoy.

With Thanksgiving already behind us, the Christmas season is well and truly here. People are putting up their trees, decking their halls and some are trying not to fall off of their ladders while attaching Christmas lights to their house. The holiday spirit is alive in the homes and hearts of many, but one local resident is just a little more festive than the rest.

Danny Wade has spent the couple of months preparing his yard in Three Way for his annual Christmas lightshow he puts on every year for the public. He has worked tirelessly untangling lights, programming songs and ensuring every detail is just right in time for the start of the season.

Wade’s lightshow began nearly eight years ago in 2014 when his wife, Teresa, asked him what he wanted for Christmas. When he told her he wanted the Light-O-Rama system, she got him the starter kit, which contained a 16-channel controller, the software and the cables. He worked on the software system for a while until he thought he was ready to begin programming, but it took him hours at attempting the timing of songs with the flash of the lights. Ultimately, he got a song partially finished from beginning to end using two of the channels, which were the house lights in blue and red. After many hours of continual hard work, he got his first song working that year.

“Learning to work the software was a lot harder than I ever expected,” Wade explained. “To this day, I know the software, but it takes hours and hours to program a song.”

Wade described his brightly lit hobby as time consuming. Programming the songs for the show takes around an entire 40-hour workweek. The software he has become familiar with over the years is a grid with the channels lined up on the left hand side and the top divides the song into segments. He sets his segments at .05 seconds, meaning there are 20 segments per second. Without a small timing, the lights will not hit exactly right on time with each song. Wade explained how frustrating it is sometimes to get it just right.

Wade’s love of Christmas lights started long before he decided to start a light show of his own. When he was younger, he loved decorating his house for Christmas. He mentioned remembering having a couple of strands of the big bulb lights with different colors at his childhood home that weren’t even long enough to cover the entire front of the house. That did not stop him from wanting to put them up regardless.

When Wade and his wife married and had kids, he got back into the spirit of Christmas by hanging lights and decorating the inside of their home. Now that their children are grown, the Wades split the tasks evenly with husband doing the outside decorating and wife doing 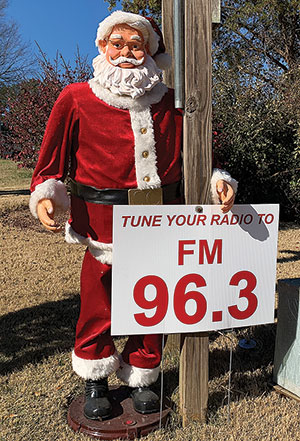 the inside. Wade jokingly called his wife his own personal elf when he needs an extra set of hands to decorate. The want to decorate for Christmas is not something he passed down to his sons, though.

“I ruined my kids on Christmas decorating when they were young. I made them help put the lights up and they hated it,” Wade recalls of his children’s disdain for decorating. “To this day, neither one of them want to decorate for Christmas. Luckily, both of their wives love to decorate.”

Wade builds all of his own props for his show. He has a 20-foot mega tree with a 3-foot star on top. The mega tree is covered in red, blue, white and green lights, about 6,500 total. He built two Webber trees, which history states got its name by either the man who created them or because the lights spiral around the frame and resemble a spider web. Wade’s yard is decked out with four leaping arches, two starburst, a 20 X 10 sunburst, six spiral trees, four 3-foot snowflakes, three spinning candy canes with eight canes each and both his house and shrubs have red and blue lights on them. He also has dripping icicle lights on the house as well.

“I do this out of love. I want to share my love of decorating with the public. I love seeing people stop their cars in the road and sit and watch and listen to the lights and music. I have people all the time tell me they stopped in front of my house to see the lights,” Wade gushed. “Some will stay for every song, which is perfectly fine with me. I have about eight or nine songs programmed, and I have added two new songs this year.”

Some people call Wade the Clark Griswold of Three Way, but he adamantly disagrees. He is a Christmas enthusiast through and through, but unlike Griswold, Wade’s lights have more pizazz. Griswold’s lights only require a flip of a switch to illuminate the 250 strands of lights with 100 individual bulbs on his house for a total of 25,000 Italian imported twinkle lights shining. Wade’s lights, a total of 31,744 LEDs, do all of that and dance to music. It is easy to see which is the superior Christmas extraordinaire.

If you want to catch the Christmas lightshow at the Wade residence, the address is 95 Green Rd, Three Way, 38343. Don’t miss the shining spectacular this holiday season.