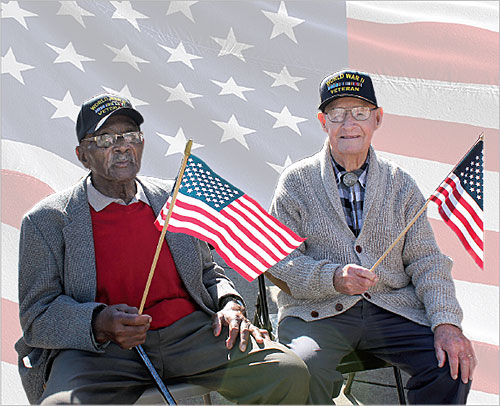 by Ariel McRae and Danny Wade

People from all over Humboldt gathered together on Main Street to celebrate the honor and sacrifice of local veterans on Friday, November 11. The Humboldt Exchange Club organized this event for the public to honor those who have served from Gibson County. 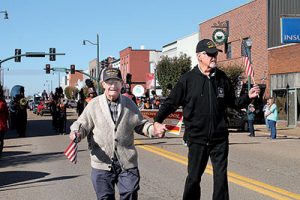 A parade kick started the program. It was short and sweet with a few misty eyes in the crowd as they watched several veterans walk in the parade, especially one of the vets present who served in World War II, 97-year-old Whitney Thompson.

The celebrations continued inside of Magnolia Manor with the veterans and attendees being welcomed to the ceremony by Humboldt Public Library Director John Blankenship. During the opening, Blankenship thanked the honored guests their service and told them they were part of the greatest generation. Both Thompson and 100-year-old William “Kent” Dennis are veterans from the Second World War. He told the crowd how much of a privilege it was to be able to talk with them and take part in the history of those who have served in this town. Every person attending the event gave the gentlemen a standing ovation.

The welcome was followed by a prayer given by local minister, Kenny Perry. Then, Ashley Niven, children and youth services librarian, brought the homeschool library group up to the front to lead everyone in the pledge of allegiance. Afterwards, everyone remained standing for the Nation Anthem performed by Jessie Yarbrough. An English teacher at Humboldt Jr./Sr. High School, Katrina Smith, performed an original spoken word poem to the gathered crowd about veterans being the ones who still defend America while civilians are granted the ability to continue living everyday, mundane lives with the freedom they’ve been awarded.

Humboldt Mayor Marvin Sikes gave the proclamation of the ceremony. He told the honorees and attendees his 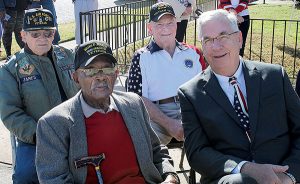 family was touched by war throughout his life. He recalled his mother waiting at home for two of her boys, his brothers, which went to fight in the Vietnam War. He described how she would wait and hold her breath for any letter or news about her babies. During his speech, Thompson teared up on stage about the emotional picture Sikes painted.

Sikes ended his proclamation by reading a decree from the city of Humboldt that declared November 11 not only Veterans Day, but also Dennis and Thompson day. Everyone in the crowd stood and congratulated the vets and the Humboldt “Pride” Band played a song of celebration in their honor. The ceremony concluded on a solemn note with the playing of “Taps.”

After the ceremony, the Humboldt Exchange Club welcomed veterans, attendees and students from East 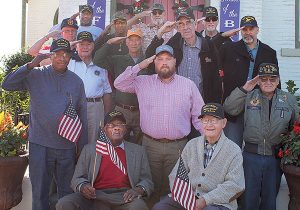 SALUTE – Local veterans from around Gibson County gather to celebrate and salute on Veterans Day 2022. The program was to honor all veterans for their service and sacrifice.

Elementary and HJSHS to witness the helicopter flown onto the Barker Memorial Stadium field by the Madison County National Guard. With the stands full of Veterans Day supporters, students, and teachers and, of course, veterans, Humboldt City Schools, George Yarbro emceed this portion of the celebrations. The program began very similar to the one on Main St., with the singing of the National Anthem, followed by the Pledge of Allegiance to the Flag.

Next, Yarbro asked the veterans in attendance to make their way to the front of the stage to be recognized. Sixteen veterans lined up on the track to a rousing applause from the audience. One by one, each veteran took 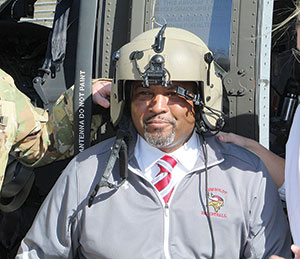 the microphone and stated their name, rank, branch of military and locations around the world where they served.

Like the earlier ceremony, the program concluded with the playing of “Taps.” After the program, students got to see the Black Hawk. Some got inside. Pictures were taken and everyone had a great time.

Veterans Day is a day to remember everything that has been given and thank those that have given it. Humboldt did not disappoint in honoring the veterans of the city of Humboldt, as well as those throughout Gibson County. The Humboldt Exchange Club hopes to have the kind of crowd turn out every year like the crowd that showed up for the veterans this year. Thanks to all veterans, who attended or were unable to attend, for your service to this city, county and country. 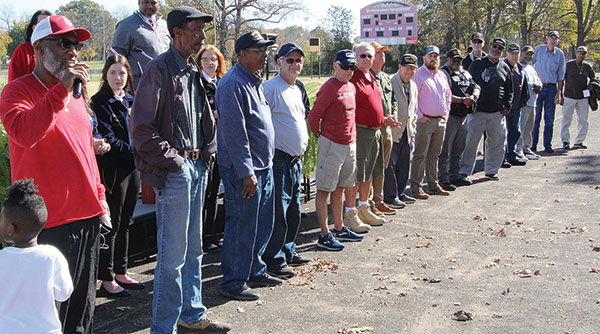 VETERANS LINE UP – The highlight of the Veterans Day program at Barker Memorial Stadium was when 16 veterans lined up in front of the crowd. Each veteran took the microphone, told their name, rank, branch of military and the locations they were stationed in while serving their country.

GET TO THE CHOPPER – Students from Humboldt Jr./Sr. High School (upper photo) and sixth graders and staff (lower photo) got to see this military Blackhawk helicopter up close after the Veterans Day celebration at Barker Memorial Stadium. Some students got inside for an even closer look.