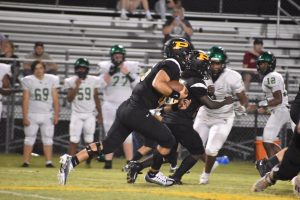 Peabody’s Sam Driggers (16) runs the ball against Lake County during a Region 7-1A high school football game during Week 3 on Sept. 2, 2022.

On Thursday, the Tennessee Secondary School Athletic Association released the 2022 Tennessee Titans Mr. Football awards, and Peabody once again has a semi-finalist.

Peabody has had a Mr. Football winner each of the last three seasons as Khalik Ganaway was a two-time winner in 2020 and 2021, while Cooper Baugus won the award in 2019.

Driggers, a Middle Tennessee State University commitment, has led the Golden Tide to an 8-2 record and the Region 7-1A championship. He missed Week 1’s game against Milan, so he is 8-1 as a starter this season.

This season, Driggers has broken the program’s single season passing record in only nine games. He has thrown for 2,001 yards and 26 touchdowns with five interceptions, while completing 119-of-179 passes (66.5%).

Driggers has also rushed for 366 yards and eight touchdowns on 50 carries.

Peabody hosts Bluff City in the first round of the Class 1A state playoffs at 7 p.m. on Friday.

The field of semi-finalists will be narrowed down to three finalists on Nov. 22, and those three are invited to the awards presentation at Nissan Stadium on Dec. 7.