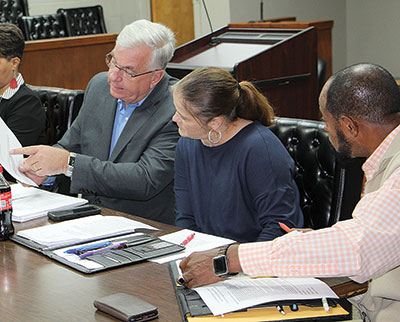 POINTS OUT AGENDA ITEM – Humboldt Mayor Marvin Sikes points out an item on the to aldermen Julie Jones-Coleman and Monte Johnson. The board approved hiring three new street department employees, approved the paving bid and passed a resolution for ARPA funds to be used for water projects within the city.

The board made quick work of hiring Tory Gray and Charles McKnight to the street department with unanimous votes. But then things went a little sideways when Taylor Wood was recommended for the rabies control officer position.

Board member Julie Jones-Coleman motioned to approve hiring Wood and Monte Johnson seconded the motion. Mayor Marvin Sikes asked Wood to step forward during the meeting. Mayor Sikes said Wood had been working part-time and noted she had met with Jackson’s rabies control officer, Whitney Owen. Owen has a good reputation of working with and rescuing dogs for adoption. During discussion, board member Shane Lynch asked if Wood has any training and suggested she need some official training. He noted that not all dogs are kind.

Wood reiterated what the mayor had said regarding working and training with Owen, and they will continue to train and communicate.

Mayor Sikes agreed that training would be good for Wood and for the city. He said he will look into animal control training and report back to the board.

When the mayor called for a vote, Johnson and Jones-Coleman voted yes while Leon McNeal quickly had a “no” vote before the mayor had a chance to call for those voting against hiring Wood. Board member Tammie Porter and Lynch were the only votes left. Jones-Coleman called for a roll call vote in order to have every board member on record. Lynch said he was recusing himself from voting due to having a close relationship with the family. This led to a 2-1-1 vote. After an extended pause, Porter said she went to the dog pound earlier that day and did not like what she saw and voted no.

Mayor Sikes announced he would be the one to break the tie and voted yes to hire Wood. He then looked 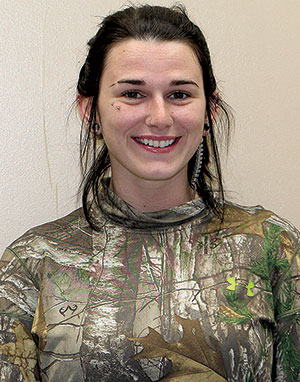 NEW RABIES CONTROL OFFICER – Taylor Wood has been working part-time as the city’s rabies control officer for the past few weeks. Last week, the Humboldt City Board narrowly approved Wood for the full-time position.

directly at Wood, congratulated her and said the two who voted no have their own reasons. Sikes told Wood to show the board what you can do and show them that they should have voted yes.

The mayor asked Porter to let him know what she saw at the pound that she did not like and so they can get it fixed.

•The board unanimously approved the paving bid from Martin Paving, which was the only bidder. Streets to be paved are all of Hunters Ridge subdivision, Fitzgerald Dr. and the street and parking lot at 6th Street Park.

McNeal question the $46,000 that had already been approved for 6th Street Park.

Mayor Sikes said the $46,000 was indeed budgeted and the $27,760 would come out of that money. The remainder goes toward other improvements at the park. Sikes noted Hunters Ridge and Fitzgerald funding would come out of the American Rescue Plan Act (ARPA), the federal government’s stimulus fund.

Gibson County will transfer $251,654 of its state Tennessee Department of Environment and Conservation (TDEC) ARPA fund to Humboldt. TDEC also appropriated ARPA funds in the amount of $1,677,694 to Humboldt, which total almost $2-million for water projects.

Mayor Sikes said utilizing these funds will focus on the west side of Humboldt for both wastewater and storm water projects. Another area of concern is an area on 30th Ave. that will be addressed.

•Mayor Sikes asked the board to hold off on hiring a new dispatcher for the Humboldt Police Department.

•The board approved the resignation of Humboldt fire fighter Eric Greene. Greene submitted his letter of resignation to acting fire chief, Leroy Kail. In his letter, Greene gave two reasons for leaving—morale and low pay. He also had medical issues that played a role in leaving.

•Mayor Sikes submitted the recommendation for David Willis to serve on the Humboldt Parks Board. Willis was unanimously approved. It was noted that the Parks Board now has all seats filled.