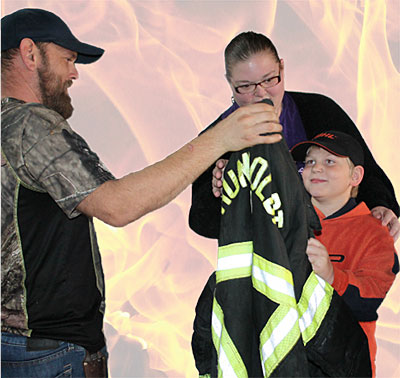 WEIGHT OF A HERO – Ed Gilchrist (left) hands Jacob Yarish, with the help of his mother Ashley, a firefighters jacket so he can feel how heavy it is for a fireman to wear. The weight of the full heroic gear is about 80 lbs. dry and 120 lbs. wet.

All across the United States, fire stations are working with schools and other programs with children to teach the importance of fire safety. Fire prevention week is celebrated during the week of October 9 every year in commemoration of the Great Chicago Fire that destroyed countless lives and properties over a century ago.

According to the National Fire Prevention Association website, either a thief or a cow tipped over a lantern in a barn on October 8, 1871. This act killed more than 250 people and left over 100,000 homeless. It desecrated over 17,000 structures and continually burned over 2,000 acres of land. On the same night, a wild fire started in northeast Wisconsin. It became the most devastating forest fire in American history. It scorched 1.2 million acres of land and claimed the lives of roughly 1,200 people.

With a growing need to teach the dangers of fire and how to remain safe during one, in 1925 the first fire prevention week was established. Since then, it is the longest running public health observance in the U.S. The goal of the week is to help prevent fires from starting and teach kids as well as adults what to do in the event that a fire is already underway. 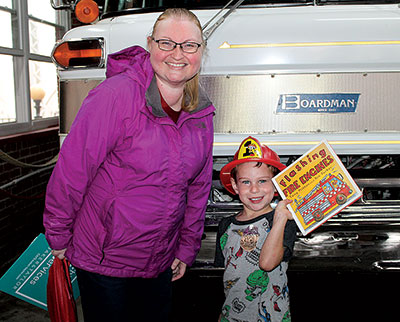 FIRED UP ABOUT READING – Ashley Niven, children and youth services librarian at the Humboldt Public Library, awards Gentry Tillman with a book about firefighters and fire safety after he won the drawing during the fire prevention field trip.

Last Wednesday, October 12, the Humboldt Public Library walked in the rain down to the Humboldt fire station to participate in the teachings of fire prevention from the Humboldt Fire Department. Children’s Librarian Ashley Niven and Library Director John Blankenship planned this activity for their participants after receiving an email about how libraries could celebrate fire prevention week. They originally planned to have a firefighter join them at the library, but they decided after discussing it with Fire Chief Leroy Kail, that taking the kids to the fire station would be more fun.

“We are always looking for fun adventures and ways to partner with the community,” Niven stated. “It is great to have several local opportunities to make stories and books that we are reading come to life and provide special experiences for these kids that they may not have otherwise.”

After returning from a call, the field trip commenced. Firefighter Levi Williams introduced himself to the kids and their parents, and described to them what to do in case there is a fire. Williams went over the importance of creating a fire safety plan including a designated location where a family can meet in case of a house fire so no one is separated. He also made sure to tell everyone that under absolutely no circumstances should you reenter a building that is on fire once you have left. It puts you in danger as well as giving firefighters an extra body to rescue while they are fighting the fire.

Williams invited the children to pass around a fireman’s jacket so they could feel how heavy it is. He told them that the jacket as well as the rest of the fire gear is around 80 lbs. dry and 120 lbs. wet.

Once the jacket was passed around, Firefighter Jonathan Stow entered the room in full gear, as well as an oxygen mask. Williams and Stow asked the children to come up and get acquainted with the gear so they would be less afraid if they ever saw or heard in during a fire. For the rest of the field trip, the group had the opportunity to tour the firehouse and learn about the tools used during fires.

Niven mentioned that last week the library created a display with their fire safety and fire fighter books. They provided tips and escape plan worksheets as well as doing fire safety story times with the kids who frequent the library. She and Blankenship wanted the kids and parents to see what the fire station is really like and meet some of the fire fighters to learn what all they do and the tools that they use. It was important to her as well as the firemen at the field trip to ensure the kids would see them as helpers and not be afraid should they ever need their help.

At the end of the event, Niven explained, “We had a few kids there that want to be a firefighter some day and it was really special for them to get to sit in the truck and take pictures holding some of the gear and get a red firefighter hat.” 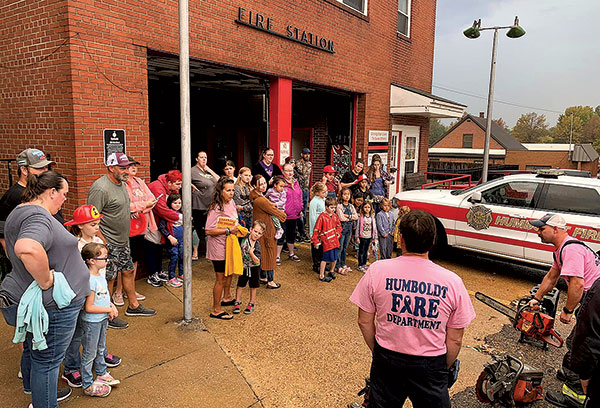 TOOLS OF THE TRADE – Firefighters show the group of interested kids and parents some of the tools that might be used when the Humboldt Fire Department needs to respond to a fire call.