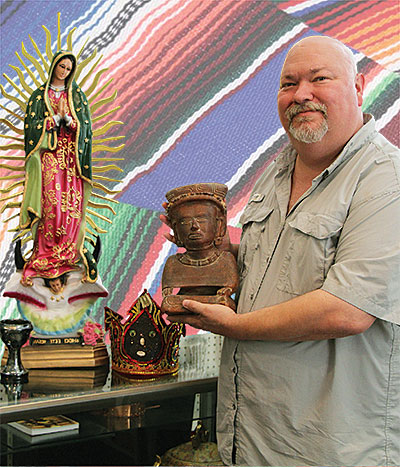 LATIN EXHIBIT – Humboldt History Museum curator, Tony Kail, proudly announces the new exhibit, “Healing Remedies and Healing Traditions of Latin-America” that will run through the month of October. The exhibit focuses on the cultures of Curanderismo and Santeria.

When Tony Kail was hired last May to be curator of the Humboldt History Museum, one of his goals was to create interesting exhibits from time to time. That is exactly what he is doing. His first exhibit was held in July and focused on West Tennessee barbecue. Now, a new exhibit will concentrate on Latin-American culture entitled, “Healing Remedies and Healing Traditions of Latin-America” and will run through October.

“Why Latin-American?—Two reasons,” Kail said as for the theme for this exhibit. “First is to celebrate Hispanic Heritage Month. Second is to focus on our local Latin community in West Tennessee—the growth and diversity. In Humboldt, we’re seeing history being made. There are several businesses on Main St. owned by Latin-Americans and others around town. Years from now we’ll look back and say, ‘Wow’, this is a historic moment in Humboldt. It’s important, as a community, being more diverse and to understand each others’ culture and traditions.”

Kail said he has done a lot of fieldwork over the past 30 years researching traditional ways of healing. He said there are many different traditions of healing in the Latin-American culture. The exhibit will focus on two of those healing cultures—Curanderismo, which comes from Mexico and Santeria, which comes from Cuba.

“Curanderismo addresses spiritual and physical healing, along with the causes of sickness,” Kail explained one of the exhibit’s focus. “Curanderismo, when there is a traumatic trauma, “susto”, the soul leaves the body. Healers used indigenous traditions combined with other traditions from all over the world. The healer may do spiritual cleansings called “limpia” that uses herbs, incense, baths, flowers and other things. Curanderismo comes from the Aztecs and Mayans.”

The other culture featured in the exhibit is Santeria, which originated from the Yoruba people from southwestern Nigeria. Kail said when the Yoruba people were taken as slaves, many were brought to Cuba. There, they were forced to give up their traditions and religion, and became Catholic.

“They had to hide their religion and gods in secret,” Kail added. “It was as if the Catholic saints were masqueraded as their gods. They have many gods for love, justice and many more.”

“Santeria use various substances such as powdered egg shells for cleansing,” Kail continued. “The people wear jewelry for protection, both spiritual and physical, protection from sickness.”

Kail said many Hispanic cultures look up to the Lady of Guadalupe as a reborn goddess. A church was built in Mexico City in her honor in 1531 and is still a monument of historic culture today.

Those who visit Healing Remedies and Healing Traditions of Latin-America exhibit at the Humboldt History Museum will see close to 100 pieces. The collection includes amulets and pieces of jewelry that were worn or hung over the doorway to protect them from evil and bring them good luck. There will be herbs used in traditional healing and remedies. The collection includes 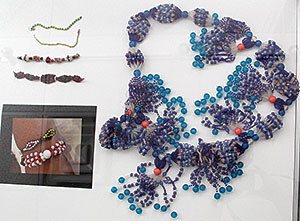 EXHIBIT JEWELRY – This Hispanic jewelry and many other cultural items are on display at the Humboldt History Museum as part of the Latin-America exhibit.

Cuban hand-crafted jewelry and beadwork made of various textiles. There are artifacts representing different spirits, and statues of saints and folk saints.