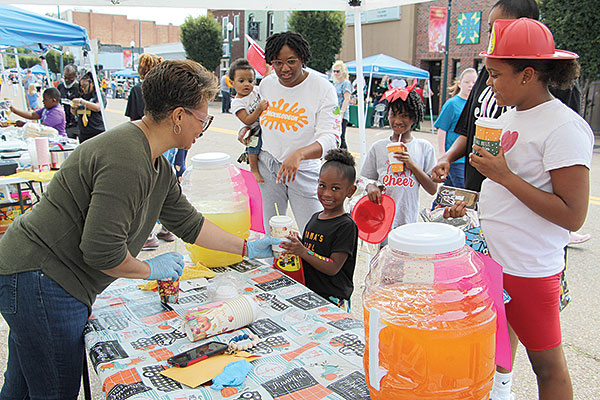 SERVING REFRESHMENTS – Marquita Patterson hands a cup of lemonade to one of the Fall Fest attendees last Saturday.

Last Saturday was a big day for kids of all ages with the 13th annual Fall Fest held in downtown Humboldt. Two city blocks were closed to traffic for the annual event.

Festivities began at 10 a.m. and wrapped up early afternoon. There was something for everyone.

For the kids, there were games and inflatables for the youngsters. A local magician performed his magic tricks, then changed over to a balloon artist, which was a big hit with children waiting in line to get their own personalized creation. They picked which color balloons they wanted and which shape. Some wanted animals while other wanted a hat or sword. Whichever shape was chosen, the artist made quick work.

To keep things festive, live music was performed at various locations in downtown, singing and playing their instruments. Some even took requests—if they knew the song.

The adult kids enjoyed the arts and crafts offered by some vendors. There were a variety of booths selling their wares while others had information about their organization. Some sold food and some gave away treats as well. 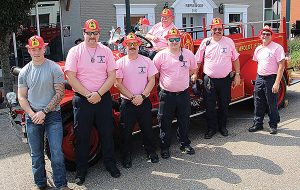 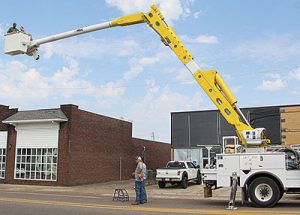 The Humboldt Fire Department had their antique fire truck on display. Fire fighters handed out red plastic fire helmets to the kids.

Bucket truck rides are always a hit. Humboldt Utilities workers lifted kids and adults high up in the air for a fantastic view, then safely back down.

Humboldt Area Rescue Squad held a Cornhole tournament for anyone who enjoys the game.

Festival-goers did not go hungry as there were food vendors offering a variety of cuisines for selection.

Fall Fest began in 2009 when the Humboldt Downtown Business Association wanted to do something fun and bring more people to downtown. Michael Longmire and Tommy Goodrum were two of the key HDBA members who took the reigns. Year after year, Fall Fest became bigger and better. There were more vendors, more concessions, more things for the kids and more people attending.

When Humboldt received state recognition as a Tennessee Main Street Community, Fall Fest became a Humboldt Chamber of Commerce event. In the process, the downtown business association merged to create a new chamber committee, Main Street. This merge was definitely for the better, especially with funding.

No matter which entity oversees the event, Fall Fest has continued to thrive. That was until Covid forced the cancellation in 2020.

It takes a lot more than the chamber and a committee to put on the day-long event. There are several volunteers to assist. The Humboldt Police Department and Humboldt Fire Department are always on hand to chip in where needed.

If you missed this year’s festival, you missed a fun-filled day of food, games, entertainment, shopping and excitement. Do not miss next year’s Humboldt Downtown Fall Fest.