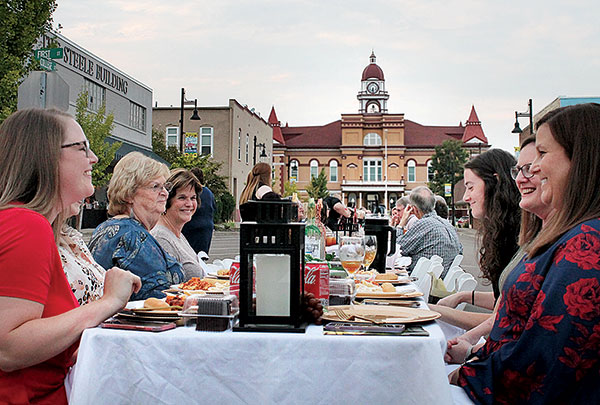 THE GATHERING – Attendees are gathered around the table in downtown Trenton in support of the fundraiser put together by the Gibson County Carl Perkins Center last Saturday, September 24.

Gibson County residents gathered around several large dining tables in Trenton to share a meal in support of the Carl Perkins Center for the Prevention of Child Abuse last Saturday, September 24.  This event was orchestrated by the organization to raise funds to further their mission to protect the kids in Tennessee, especially those that reside within Gibson County.

Attendees were invited to participate in both the silent auction as well as the live auction items during the beginning of the fundraiser. They were also encouraged to buy raffle tickets for a chance to win a bundle of lottery tickets as well as enter a wine pull. All proceeds from the auctions were collected for the Carl Perkins Center and will benefit them throughout the year as they seek to aid parents and children affected by different forms of child abuse.

Nearly 200 people dined in the middle of College St. with the courthouse as the backdrop, sharing laughs and stories while partaking in the catered meal. The theme of the fundraiser was The Gathering, which was meant as a goal for participants to bring themselves as well as someone else to the table. The attendees more than delivered on the goal that Carl Perkins Center sought out to accomplish. 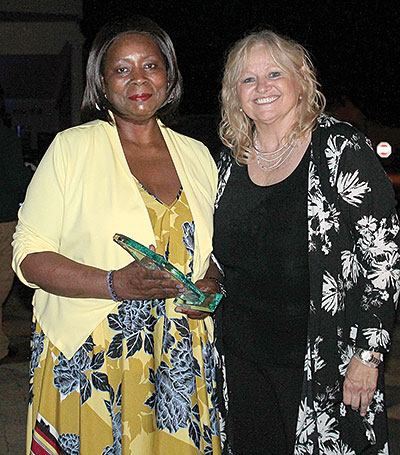 AWARDED SERVICE – Bett Jewell, director of the Gibson County CPC, awards Beverly McNeal for her years of service within Gibson County. McNeal once needed the services of the CPC when her sons were young and now she helps families in the same predicament throughout Gibson County.

During the meal, Bett Jewell, director of the Gibson County Carl Perkins Center, spoke about the importance of coming ‘to the table’ for the families who need these services. She also presented an award to a long-time member turned worker of the center, Beverly McNeal. When McNeal was a younger mother, she and her three children needed the services provided by the center. Now, McNeal works for the center to provide the help she once received.

Judith Rodish, board member of the GCCPC, was the guest speaker for the night. She urged the attendees to be involved with the program because you never know when you might need the services. She talked about how her parents were supporters and volunteers of the organization. They donated money and time whenever they could, but one night they needed the help from the center instead of giving the help. Rodish spoke about how she was being abused from kindergarten until she turned 16 when she spoke out against her abuser and the center showed up at her door to help her and her parents during that time.

Rodish furthered upon her story that the center provides children with the relief that once they start to help the family it might be the first time that the child goes to bed knowing they are safe from being abused again. Her story was inspiring and she made sure the attendees knew that it is important to never think it cannot happen to you.

and presents similar to hers. Those gathered around the table applauded her for her work and were left misty eyed as they considered the help they were bringing to children by attending this event.

The night ended with musical entertainment by Gove, followed by Paula Bridges McGill, Katie McGill and Joseph Montgomery singing and performing several songs as well as a last auction off of the live painting created of the courtyard during the event. Staff cleared the tables and guests parted ways knowing that the Gibson County Carl Perkins Center will continue doing the hard work they do that still needs to be done. 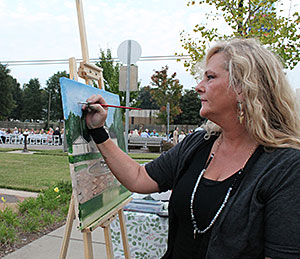 PAINTING IN THE MOMENT– Artist Dawn Siler paints the courtyard live in Trenton during the event. The painting was later auctioned off for the fundraiser. 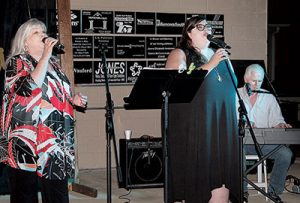 ENTERTAINMENT – Entertainment was provided at the event with singing and performing from (from left) Paula Bridges McGill, Katie McGill and Joseph Montgomery to close out the night.

Somewhere, because of the generosity of the gala attendees, a child in Gibson County will go to sleep sometime within the next few nights knowing that they are finally safe and that is something you can never put a price on. To further support this organization please visit carlperkinscenter.org.