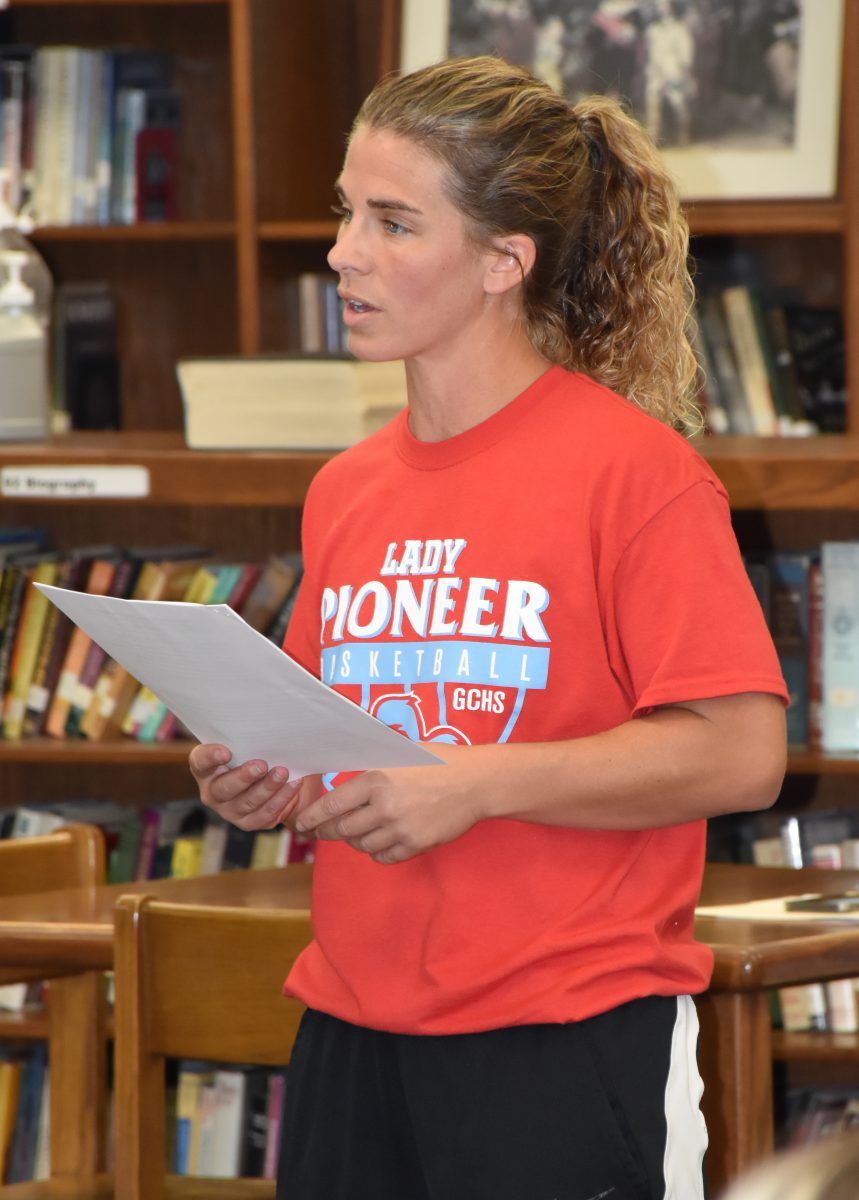 CONSOLIDATION CONCERNS – Heather Jones, a sixth grade math teacher at Dyer School, spoke on behalf of a group of 238 teachers, parents and community members that want the GCSSD to consolidate grades K-8 in the northern part of the district into one school system. Jones outlined the group’s rationale for the merger and requested that the district fund a feasibility study to determine whether it would be in the best interests of the students and community. Photo by Logan Watson.

A group of teachers and parents in favor of consolidating the schools on the north end of the Gibson County Special School District had their first official audience with the GCSSD Board of Trustees last Thursday night.
The group pressed the issue on social media during the summer, circulating a petition requesting that the district consolidate grades K-8 in Dyer, Rutherford, Spring Hill and Yorkville, as well as grades K-4 in Kenton, citing numerous academic, extracurricular and safety benefits to students.
Heather Jones, a sixth grade math teacher at Dyer School, served as the spokesperson for the group, which currently has 280 supporters. Jones has taught at Spring Hill, Yorkville and Dyer, and attended both Spring Hill and Gibson County High School as a student.

“As you consider our proposal, please make sure that we do keep students as our number-one priority,” Jones asked. “That’s what we’re all here for.”
On behalf of the group, Jones asked that the GCSSD hire an independent consultant to conduct a feasibility study for the entire district and determine whether consolidation would be in the best interest of the students.
“I may or may not know what’s best for our kids, so having that professional opinion on what our true needs for our students, our teachers and our communities are, we feel would be a great idea for our district.”
Jones stated that the group felt that not all GCSSD students had access to the same programs that some schools offer, and consolidation would give every student equal access to and increase student participation in academics, activities and arts.
“It would mean more academic opportunities like STEM and CTE,” Jones said. “When we talk about CTE, we’re talking about things like Ag, Greenhouse, Shop, Mechanics, Welding, Culinary Arts, Coding. There are opportunities for advanced courses, honors courses to challenge those higher achieving students. A lot of the schools around us offer these opportunities to kids. Consolidation would allow for an overall smaller student-teacher ratio across the entire district.”
Jones said that several of the parents in the group had voiced concerns about student safety, stating that consolidation would allow each school to have a full-time nurse and Student Resource Officer. A new facility would also allow for the addition of safety features and prevent students at Dyer from having to walk across the street multiple times each day.
“There has always been a worry for the students at Spring Hill and Yorkville about emergency crews reaching them in case of a crisis,” Jones added. “None of our schools are designed with a lobby that prevents people from coming into our school. There are lots of concerns among the community and the parents in regard to the safety of our children.”
“Our main focus is for our students. However, it won’t only impact our students, but would positively impact our staff and our community,” Jones continued. “Consolidation would allow for fewer preps [individual, different courses] for teachers, which, in turn, would help with teacher retention. We’re losing lots of teachers to neighboring schools and school districts because of the fact that they’re having to teach multiple subjects or multiple preps. Some of our teachers are having to travel now, and that’s causing some of them to look for other opportunities in other places.”
Jones added that the group felt consolidation would allow for an increase in the salaries of teachers and increased benefits, as well as provide parents with Preschool and Early Childhood Care programs.
The Board was not opposed to the group’s request for a feasibility study, but agreed that there were a lot of variables that would have to be taken into consideration.
“I’m sure there are companies that have done this in the past with the resources to look at your infrastructure, available land and the cost,” said Board Chairman Tom Lannom. “Or, they may tell you, it may not be the right thing right now, but when it gets to this point, you need to start looking at it…when enrollment at any school gets below this point. In Dyer, I think they’re almost at capacity. You’ve got both ends of the spectrum. Does it make more sense to renovate part of Dyer since they’re at capacity? You would need a feasibility study that would do the whole package and compare.”
“Feasible doesn’t equal best,” said Board member John Campbell. “Of course it would be cheaper with one facility, having everything under one roof, but just because it’s feasible and we would be saving money, that doesn’t mean it’s going to benefit the whole community. The worst thing that could happen to these small towns many years ago was to have the factories plucked out of them. The factory plucked up and towns are kind of drying up now, so plucking the school out, too, that’s a big step. There’s a whole lot of data that isn’t going to show up in a feasibility study.”
Cassie Prestininzi, a member of the group, added that she felt the affected GCSSD staff and community members needed to be polled to determine their opinion.
Chairman Lannom suggested that the GCSSD seek out a representative from such a company to meet with the Board in the future to discuss what the study should cover. In the meantime, the Board will hold a work session next month to research and discuss the matter further.
“I think it’s information that we, as a Board, need to know,” he said. “It may tell us something that we need to look out for.”