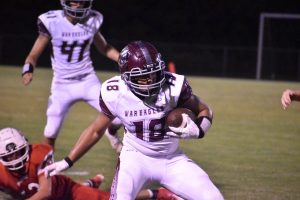 After battling to a 42-42 tie in regulation, West Carroll’s Jayden Milton scored on a three-yard run to put the War Eagles up 49-42.

South Fulton answered with a touchdown run, but the West Carroll defense made a defensive stand to lead the War Eagles to the 49-48 overtime victory over South Fulton on the road on Friday.

Early on it was trading touchdowns as Jay Long scored on a 56-yard run to give West Carroll the 7-6 lead. Milton scored on a 27-yard run for the 14-12 lead.

In the second half, Milton scored his third touchdown of the game from two yards out to tie the game again 28-28. The War Eagles took its first lead in the second half late in the third quarter as Long scored from 48 yards out for the 35-28 lead.

Peabody’s offense accounted for 377 yards with Sam Driggers throwing three touchdowns and running for another as the Golden Tide won a third straight game this season.

Driggers completed 19-of-24 passes for 235 yards and three touchdowns. Two of those touchdown passes were caught by Derek Kee, who finished with 81 yards receiving, and the other went to Garrett Webber, who had 93 yards receiving.

Despite a 30-minute delay to the start due to Kirby arriving late and a torrential downpour midway through the second quarter, the Hornets had no trouble beating Kirby.

The Bulldogs scored five touchdowns in the first 17 minutes of the game to easily dispose of Liberty.

This was Milan’s second defensive shutout of the season after giving up no points to Manassas in Week 2.

The Lions scored 35 points in the first quarter to shut out Gibson County.

This was the second straight week that Dresden shutout an opponent, and the Lions only gave up six points in Week 2.

Gibson County (1-3, 0-1 7-2A) returns to region action next Friday as the Pioneers travel to Union City.