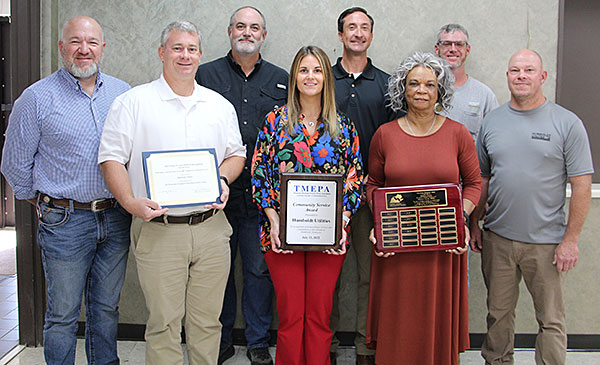 Those who are customers of Humboldt Utilities know just how fortunate they are to have such an outstanding company ensuring their lights are on, water is running, gas is burning and sewer is… well… sewaging. This does not happen on its own. It is the professional men and women of Humboldt Utilities working together as a team to keep everyone’s utilities are working properly as expected.

Because of their hard work, Humboldt Utilities earned three major awards for their exceptional service. General Manager Alex Smith insists these awards are not his, but the entire staffs from top to bottom.

Smith said he is most proud of Humboldt Utilities winning the TN Municipal Electric Power Association’s Community Service Award for 2022. Humboldt Utilities won in the “small system” classification, which is for municipal utility companies with less than 10,000 customers.

“This is the first time we’ve won this award,” Smith said, beaming with pride. “The association gives out one each year.”

In a presentation letter from TMEPA, President Jeff Dykes stated, “Sometimes it is in smaller communities that a utility company can have a huge impact compared to their size, and that’s certainly true for this one. Its employees are involved in numerous ways in the community including fundraising for the Boys & Girls Club, volunteering at the local soup kitchen, being members and officers of various civic organizations like Rotary, Lions Club and Junior Auxiliary, and the Chamber of Commerce, local FEMA organizations, and Helping Hand.”

For the past 40 years, Humboldt Utilities’ intern program has employed high school and college students each summer to gain work experience, learn teamwork and kick-start their resumes. Some of these interns have come back to work for Humboldt Utilities. GM Alex Smith was once an intern while he attended school and now he leads the award winning utility company.

During the Covid pandemic, Humboldt Utilities helped facilitate and raise over $50,000 for Covid response along with community leaders, civic clubs, local businesses and TVA. Their Round-Up Plus program collects and distributes approximately $40,000 annually. Any Humboldt Utility customer can sign up for this program, which rounds up the customer’s bill to the next dollar. That spare change collected adds up quickly and is used to help those in the community.

Humboldt Utilities is so much more than just the city’s utility provider. They are part of the community in so many ways, it’s no wonder they received this prestigious state community service award.

And if that were not enough, Humboldt Utilities recently won two other awards.

For the 10th consecutive year from 2012 until 2021, Humboldt Utilities WWTP (wastewater treatment plant) has been the recipient of the Operational Excellence Award, which recognizes the dedication, resolve and outstanding effort of the employees of this facility by having no more than one violation of its permit limit during the annual reporting period. The Kentucky-Tennessee Water Environment Association presents this award to the best of the best utility companies across two states.

The third award, which is equally significant, is through the Tennessee Department of Environment and Conservation. Smith said TDEC selects one utility company project each year. Humboldt’s new wastewater treatment plant was selected as TDEC’s project of the year.

Smith said this was a collaboration with entities at the state and federal level, as well as the county and city, for innovation and technology used to protect the environment. He said there are a wide range of factors TDEC uses to determine the award recipient, such as growth in the community, creating jobs, enhancing life and, of course, being environmentally conscious.

To say Humboldt Utilities has been busy the past few years would be a major understatement. Not only have they constructed a whole new waste water plant, they added a new well at the water treatment plant, which also was upgraded to handle the added potable water needed to help supply the Gibson County Industrial Park with Tyson’s and FedEx’s demands. Humboldt Utilities also built a 1.5-million gallon water tank at GCIP and added a new substation to supply electricity to the industries. Top all of their improvements off with having one or fewer violations for waste water treatment for 10 straight years, it is easy to see how they could win such a prestigious award.

“It’s not me—it’s us,” Smith said of the utility company as a whole. “They are the ones who put in the time and dedication that allowed us to receive these awards.”