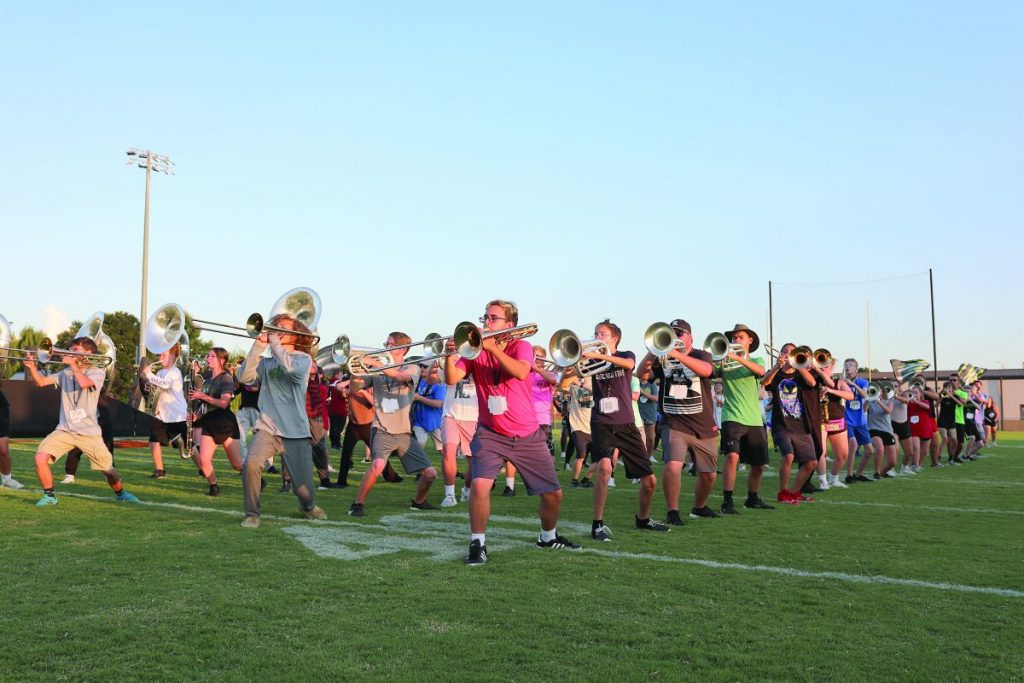 SPOOKY SHOW – Hornets band members rehearse for their upcoming performance of “Marked” on Thursday evening. The horror-themed performance will debut during halftime on Friday night, Aug. 26. Photo by Caleb Revill.

SGCHS Band Director Stephen Price said that the rehearsals for the performance of “Marked” have ranged throughout the summer. The horror-themed halftime show came to fruition after months of hard work from instructors, students and parents alike.

“We’ve taken all of the elements of scary movies,” Price said. “It’s not any particular scary movie, just every scary movie you’ve ever watched probably has something in this show. From paranormal happenings to hauntings, spooky music and a monster, it’s got everything.”

Following last year’s “positive show” coming off of the pandemic, Price said that the band’s visual team decided on doing the theme a little differently this year.

Preparing for this year’s performance hasn’t been without hurdles. Price said that the summer heat this year has been the biggest obstacle.

“It has been August-type weather since the beginning of June, and it hasn’t let up,” Price said. We’ve been fighting 100 degree heat, and when the heat index gets to a certain point we have to come inside to keep the kids safe … That has been the main challenge to me, just the heat.”

During a Thursday night rehearsal, Price and several students spoke about what they’re most excited for about their upcoming performance and band in general this year.

“The most exciting part to me is being able to let the kids show the hard work they’ve done,” Price said. “These kids work just as hard as anybody else, sometimes harder. When you get the chance at the football game, take the time to stop what you’re doing and watch the band. Cheer for them, because they really do feed off the energy of the crowd.”

Senior mellophone player Jayla McAnally’s favorite part about being in band is building relationships and growing as a person. The Hornets Leadership Team member said that she isn’t nervous about Friday night’s show.

“I think everyone is ready,” McAnally said. “We have practiced very, very hard since the beginning of band camp. We’ve all gone through at 110 percent … Once we get onto that field we’re ready to go.”

McAnally said that the show will include huge props and movement coordination that other bands in the area rarely do.

Senior marimba player Peyton Johnson will be leading the front ensemble as section leader. She said that the band is like one big family. 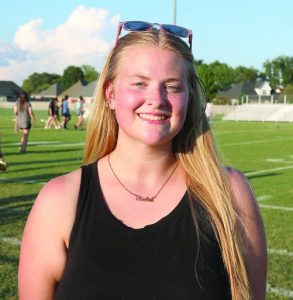 “I’m most excited to show the community how much their support helps us, and we just want to give back to them and give them a good show,” Johnson said.

Junior drum major Drew King said that this year’s show will include a monster that possesses people.

“We have worked so hard this year since the very beginning of June,” King said. “We’ve worked on this show back to back days and nights to really get that practice energy in and make the show the best that it can be.”

Senior field commander Anna Daniel is excited to be a leader for the Hornets band during Friday night’s performance. 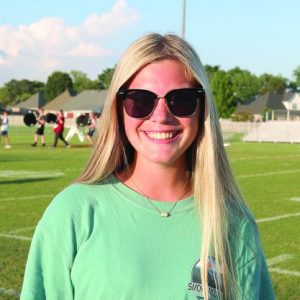 “Band is amazing, I wouldn’t want to do anything else,” Daniel said. “I’m most excited for the amount of improvement we’ve made … I’m excited to see all the hard work pay off, see everybody have fun out there and do what we do best.”