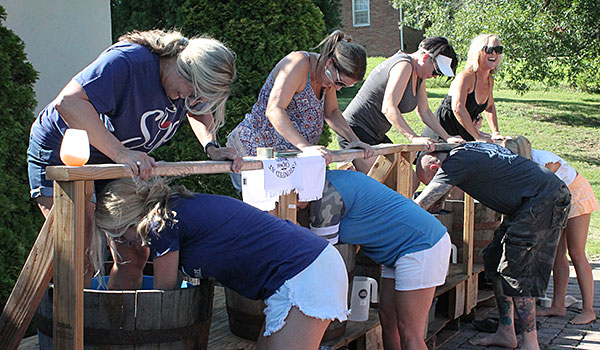 GRAPE STOMP – First round of hopeful participating teams stomp away at Crown Winery’s 5th Annual Grape Stomp to pay homage to the original way of producing wine by crushing grapes with their feet. No juice stomped by feet was made into wine.

With summer coming to a close, it is nearing time for the grapes covering the vast expanse of vines to be harvested and crafted into wine at one of Humboldt’s busiest venues. The 5th annual Grape Stomp was held at Crown Winery on Saturday, August 13 to commemorate the harvesting season.

Teams from across the state as well as from several states bordering Tenn. came together to participate in the fun competition at the winery on the second Saturday in August. These teams were comprised of two people mostly wearing matching outfits and bringing their best A-game in order to out stomp the other teams in attendance.

The goal of the grape stomp every year is to produce the most juice by weight from stomping and crushing the grapes in a bucket with your team member. The juice from the grapes goes through a funnel at the bottom of the half barrel and into a bucket below 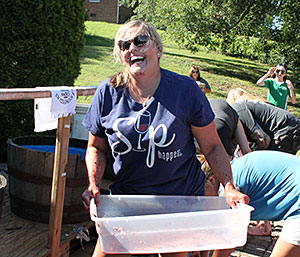 BUCKETS OF JUICE – Becky Horn laughs while carrying the bucket full of juice she and her partner stomped to the pitcher they had to transfer it into for it to be weighed in the grape stomp competition.

where, after one minute of stomping per each team member, the juice is poured into pitchers to be weighed by the judges. The juice from the stomp, while making a team victorious, is not used in any wine made at Crown Winery.

“Nobody’s feet were on any grapes made into wine here,” laughed owner, Dawn Fallert as she expressed how much she wanted to reiterate that crucial detail. “The Grape Stomp is just for fun and to give a toast to when stomping was the only means to create wine.”

While the symbolic stomp is not put to use in the many wines created at Crown Winery, it is an event that helps the staff celebrate the harvest for that year. Grapes are harvested in August every year depending upon the weather from the previous seasons. Sometimes the fruit is pulled towards the beginning of August and the stomp is held accordingly, like this year. However, some years the weather does not cooperate nearly as well and the stomp is put on hold to closer to the end of August.

“Depending on the harvest, we try to pull red or purple instead of white grapes for the stomp so the team members can make fun 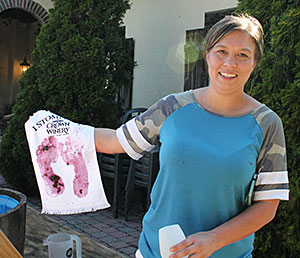 FOOTPRINTS – Cassy Durbin holds up her souvenir towel sporting the grape juice covered footprints she produced from stomping in a bucket of grapes at Crown Winery.

footprints on their towels,” explained Fallert. “This year the teams stomped our noiret grapes. My husband ran the harvester that morning to get fresh grapes for the team to stomp.”

For the fifth year of the grape stomp, Crown Winery had a record turn out for the event. Usually there are only around 20 teams for the stomping portion of the evening, but this year there were about 44 different teams to go through. In total, there were around 200 to 250 plus people prepared to get their hands and feet dirty in the name of friendly competition.

“I had to get my son and some of his friends to handpick grapes later that day so we could have enough [for everyone],” Fallert exclaimed in excited disbelief.

There are a few ways to win at the grape stomping event. One category is an award for the best dressed. This is given to the team that has the most creative costume of the day. This year the winner was the team called ‘Lucy and Ethel.’

Another way to win is to produce the most juice from the stomp itself. This is a tiered win with a first, second and third place prize. First place this year was a team named ‘New York Stompers.’ In second place, the ‘Purple Rain Stompers’ took the prize. In third and final place came the team called ‘Cabernet Carters.’ This team has actually competed and placed first in the past. Winners receive various prizes from bottles of wine, t-shirts and wine accessories.

Next year’s grape stomp is already tentatively on the books for August of 2023 and while the Crown Winery owners are keeping the date hush-hush for now, they are already looking forward to another fun-filled day of celebrating the history of wine making.