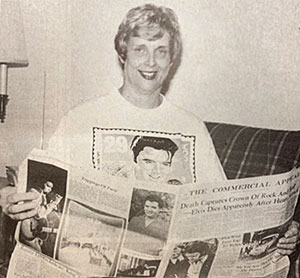 Soulful crooning filters out the humble home of Barbara Cleek where long-loved Elvis memorabilia lines the shelves inside her modest living room. Tattered magazines from over the years fill a wicker basket near her worn reading chair adorned by a multicolored, hand stitched blanket covered in music notes and the likeness of her favorite singer hanging off the brown-suede recliner. It is here, surrounded by souvenirs and cassette tapes, where one of the late King’s biggest fans remembers his career and the effect his life had on hers.

Elvis Presley began his career at the tender age of 19 in the year 1954 with Sun Records, which stands in the heart of downtown Memphis, Tenn. This small town Tupelo, Miss. talent could never have predicted the impact he would have on the world, let alone on a girl from an even smaller country town within West Tennessee.

After his recording contract sold to RCA Records in the fall of ’55, Presley went on to perform on the Ed Sullivan show on September 9, 1956 and again a month later on October 28. During this performance, most of which was filmed above the waist due to his provocative for the time dancing, he lit a fire within the hearts of fans everywhere, including a teenaged Barbara Cleek.

When asked about the first time she ever saw the Tennessee Troubadour perform, Cleek started laughing and gushed with awestruck wonder, “I got cold chills. I had to grab a blanket and cover up!”

Cleek described Presley as if she were discussing an old friend. She said her parents, through all of their faults in raising her, never forbade her from listening and watching the heart throb singer throughout his career despite thinking his movements were ‘nasty.’

Cleek was not the only Obion County girl with an affinity for Elvis the Pelvis. Her lifelong childhood friend, Letetia Henley (now Kirk) shared her obsession with the rockabilly singer. 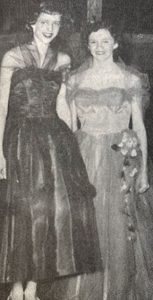 BLAST FROM THE PAST – Barbara Cleek (left) and her childhood best friend Letetia Henley Kirk. After both girls dreamt of marrying Elvis Presley in their teens, Kirk went on to become his private nurse and close friend while also living at Graceland.

“[In] about the eighth grade, she and I were both gonna marry him when we grew up,” Cleek shared with nostalgia glossing over her eyes at the remembrance of youthful days past with her best friend.

While neither woman grew to marry the famous musician, Kirk did end up doing the next best thing. While working in a clinic in Memphis, she met Presley during a late night check up and, taken with her country ways, he invited her to be his private nurse. Kirk lived at his Graceland address with her entire family. She resided at his personal residence in a trailer made specifically for her family until Presley’s untimely death at the age of 42.

Presley’s nurse turned close friend. Kirk lived out a childhood dream come reality with becoming close to Presley, but Cleek never had the chance to meet him much to her regret.

“When you’re raising three kids, you just are not going to concerts that’s for sure, and had (I) known that he wasn’t gonna live forever…I wished I had. As I think back, I could have said, ‘Letetia, when can I come meet Elvis?’” Cleek spoke about not thinking about meeting Elvis before he died. “You put your heart into parenting and the years just pass you by.”

Graceland, once home to Presley as well as her friend Kirk, remains in Memphis, Tenn. as a booming tourist business serving as a reminder of how many people have been touched by the music and life of Presley with upwards of 500,000 plus visitors each year trekking to the mansion he once called home.

While she never managed to see the Cool Cat in person, her son would always tell her it was a shame she never got to meet him so one year he surprised her with an opportunity he knew she would never refuse. Cleek jumped at the chance to visit Graceland and spend time with Presley the only way she could. When 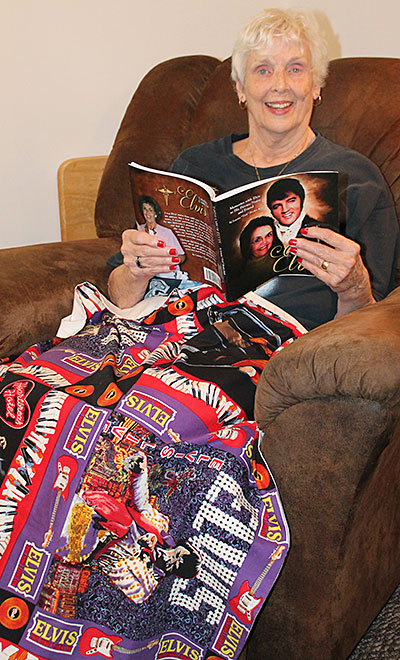 ELVIS WEEK – 20 years later, Cleek (below) remembers her fondness of the late singer throughout her life and how at the 45th anniversary of his death, he is still her ‘Bossa Nova Baby.’

talking about her visit to the mansion, Cleek smiled with fondness of the memories she made while on her only trip to Graceland.

“While I was in there, I felt his spirit so strong. It was just like he was there,” Cleek expressed, nearly teary eyed.  “It was eerie in a way, but I was impressed.”

She shared that when she and Kirk were younger both girls received a record player signed by Elvis Presley himself. Cleek said that while the singer was still living, her record player stopped working so her husband encouraged her to throw it away. She said she hated to no longer have the player, but she did part ways with the treasured item. She said recently she was talking with Kirk about the record player from their past and Kirk informed her that her record player is on display at none other than Graceland itself.

This year fans of The King, young and old were blessed with a movie honoring the singer’s life with a biopic on the man himself played by Austin Butler. While reviews for movies detailing such beloved figures will always have differing critiques, for Cleek, the movie was an ace in the hole. Her eyes sparkled and she clutched her chest as she blushed at the impression Butler gave of Elvis throughout the movie. She thought he had his mannerisms down pat and, donning a sly expression, explained how she thought he was ‘hot stuff.’

Cleek’s favorite song from the discography of the late musician is ‘Unchained Melody.’ With a melancholy tone, she explained that when she witnessed the scene at the end of the movie when Butler depicted one of Presley’s final concerts during the last year of his life it nearly brought her to tears.

This year, on August 16, the heart and soul of Memphis will have been passed for 45 years. In 1977, Presley died of an apparent heart attack at Graceland and left the world to mourn his passing with shock and sorrow. Cleek was adamant that she could not believe it when the news broke over the television and the lifelong star of her heart had died at only 42 years old.

“My immediate thought was, ‘What’s the world gonna do? How can they do without Elvis?’” Cleek shared of her initial thoughts upon hearing the sad news. “The year Elvis died I called [my sister living in Memphis] on Christmas and said, ‘Well, I know it surely must be a ‘Blue Christmas’ and she said it was.”

Cleek’s husband, unfortunately, also passed away a few years ago and for his funeral she honored her love for him with a couple of Elvis Presley songs. She joked about how her husband, Gilbert Cleek, never understood her love for the musician but agreed that funerals are for the living. Sharing her beloved music during the passing of her husband was hard, but she could not have expressed her love in a more meaningful way than with Presley’s songs.

Her ‘burning love’ for Elvis Presley will transcend even her own death, as loved ones will gather on one (hopefully distant) day at her grave to pay respects and see the TCB lightning bolt next to her name. While her husband’s love of trucks shines through the image of a semi-truck on his headstone, those visiting will know that, at least for Barbara Cleek, no one could ‘take care of business in a flash’ more than The King of, not only Rock ‘n’ Roll, but also, her heart.