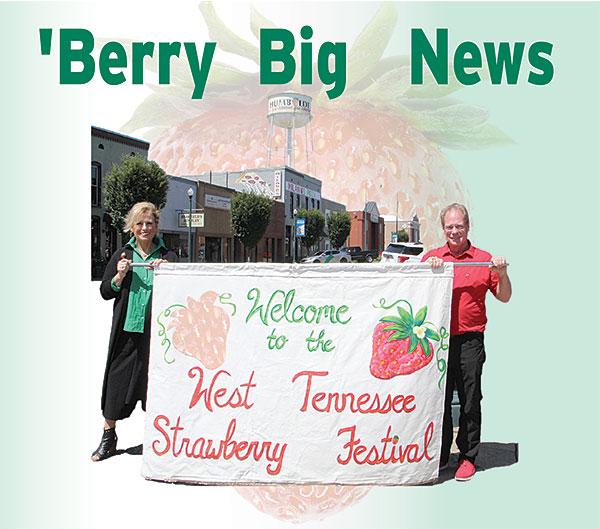 When Shane Lynch was named general chairman of the 84th annual West Tennessee Strawberry Festival last year, the gears in his brain began to turn. Lynch knew he had important positions to fill for the 85th festival—general chairman being the most important.

Luckily for Lynch, he had a short list—a very short list. In fact, he had just one name, Anne Short.

Shane and his wife, Libby, and Anne and her husband, Doug, are good friends. Lynch and Short had a lark that if one was named Strawberry Festival general chairman, the following year, the other would be their general chairman.

“Sherry Jo (Smith) called me a week later,” Lynch recalled being asked to be general chairman. “So I called Anne and said, ‘guess what?’ We had a good laugh because neither of us thought we’d ever be chosen.”

“He said, ‘do you remember?’” Short said of their phone conversation last year. “I laughed and said ‘no’, ‘I kinda remember’. I told him I would think about it.”

In the meantime, Lynch would remind her every time he saw her with a friendly, ‘are you in?’ Lynch talked to Doug, who was fully supportive of his wife taking on this very important position of leading the Strawberry Festival. After a couple of weeks thinking it over, Short accepted and was up to the challenge.

With Short (unofficially) onboard, it would still be several months before Lynch brought his selection to the Humboldt Chamber of Commerce Board of Directors. The board met last week and approved Short being festival general chairman.

“I’m already planning for next year,” Short said last week, as she will be doing this exact same thing next year, naming her general chairman.

“I’m still waiting on a dozen roses and my crown,” she joked. “Instead, I get business cards.”

Short has been involved with the Strawberry Festival for as long as she can remember. As a very young child, her parents, the late Bob and Jane Atkins, built a house in Humboldt and moved her in the 1960s. The Atkins became friends with Herman Ray and Marzette Stallings. They formed a group and built some of the most beautiful, extravagant floats to ever grace the parade route.

“I love the parades,” Short said. “One of my many favorite memory as a child was riding on the float, “King of the Road”. It was a giant antique car with a cat sitting in it, smoking a cigar.” 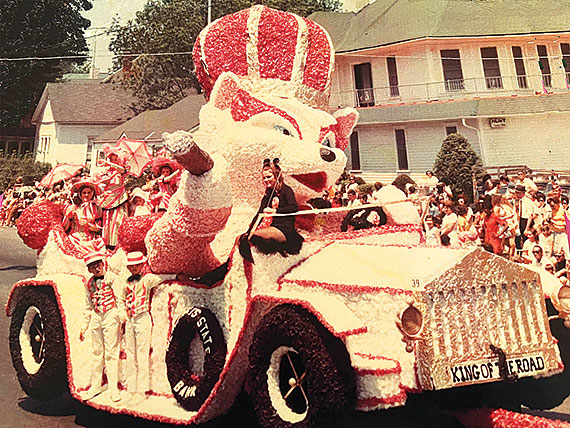 BACK IN THE DAY – One of Strawberry Festival General Chairman Anne (Atkins) Short’s favorite festival memories was riding on this float in the Grand Floats Parade in the late 1960s. Short was named general chairman last week and will serve with President Shane Lynch over the 85th annual West Tennessee Strawberry Festival, May 7-13, 2023.

“I love seeing the town come together downtown with live music and the carnival,” she continued. “Having everything downtown was the best move.”

From riding on floats as a toddler, to her own children competing in Strawberry Festival pageants, to serving on various committees, Short has been involved with Humboldt’s claim to fame spanning decades. She has served on the Queens’ Luncheon Committee, the Governor’s Luncheon Committee, rode and built floats and so many other volunteer opportunities, there is no wonder Lynch had her in mind from the get-go.

When Vickie Hale served as festival president, she named Short’s mom, Jane, as her honoree for her years of service building floats and serving on festival committees over the years. Now, the daughter who followed in many of her mom’s footsteps, continues to climb the ladder and is the new Strawberry Festival general chairman.

President Lynch is excited to have Short as his general chairman, saying “She’s outstanding, she’s a go-getter that will get things done, she gets along with people, she’s very organized and most of all, she loves the Strawberry Festival.”

He and Libby are looking forward to working with Anne and Doug to make the 85th West Tennessee Strawberry Festival among the best ever. Their first official function as a team will be the Soybean Festival in Martin, Tenn. in September. Royalty and officials’ pictures will be made in the fall. They plan to attend Christmas parades in Milan, Medina and Jackson, as well as attending Humboldt’s Christmas on Main celebration. Then in the spring comes the Strawberry Festival City Tour, the Paris Fish Fry and the Trenton Teapot Festival. It all culminates with the week-long Strawberry Festival, May 7-13 in 2023.

Even though Short may have been on Lynch’s short list, they have a fun, exciting, long road ahead planning for the greatest celebration in Tennessee.

“It’s such a special time for Humboldt to come together as a community to honor our festivals’ history, celebrate and enjoy our present, and look forward to future festivals,” Short said of her favorite time of the year, the West Tennessee Strawberry Festival.