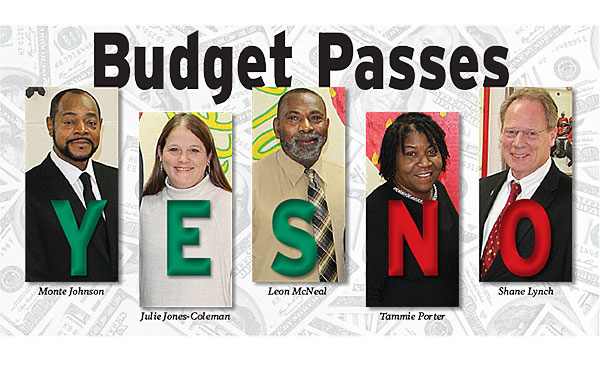 The Humboldt City Board approved the city’s 2022-23 fiscal year budget last Monday evening. The second reading of Ordinance 2022-03, adopting the annual budget and keeping the property tax rate the same at $2.7297 per $100 assessed value.

Prior to the board’s Monday, July 11 meeting, a public hearing was held at 5 p.m. for two ordinances—one for the budget and another to rezoning property. Mayor Marvin Sikes asked if anyone wanted to speak regarding these ordinances but no one spoke up. He closed the public hearing.

As the regular meeting began, the first item of business was the second reading of Ordinance 2022-01, an ordinance to rezone property located at 23 William Barnett Rd. from M-1 light industrial to R-1 medium residential.

Alderman Shane Lynch asked if Michael and Shirley Simonson were the owners as listed in the ordinance. Mayor Sikes replied that they are purchasing the property upon it being rezoned where they plan to build a house and small farm.

Alderwoman Tammie Porter asked if this was the old city dump property, to which Mayor Sikes said no, but the property is next to the old dump.

Lynch asked if the vote to rezone should wait until the new owners find out how much it will cost to have water and sewer run to the property. He asked if they know they will have to have utilities.

With that, the board unanimously voted to adopt the second reading of the rezoning ordinance.

BUDGET PASSES – The third time was a charm for the Humboldt City Board to pass the city’s budget ordinance’s two readings with a 3-2 vote. Aldermen Shane Lynch and Tammie Porter voted against the budget. Lynch said he wanted more money for employees, for parks and paving, while Porter stated she wanted more money for the firemen.

When the budget ordinance’s second reading was brought to the table, Mayor Sikes noted the property tax rate is the same.

During discussion, Alderman Lynch said he wanted to make a statement on why he voted against the budget the first time. Lynch said the budget only has a 3-percent raise for city employees, there is no plan for the city’s parks and no paving plan.

“We need a forward looking budget that doesn’t keep us at the status quo,” Lynch stated.

“I hear where you are coming from,” Mayor Sikes replied. “We need a lot of things. Our budget is bringing in the same since 2017. But we know more is coming. Going up on taxes is not the way to go. We’ll see the fruits of our labor—50 houses going up, FedEx, Tyson, banks.”

“Blue Oval City is 90 minutes (away),” Lynch responded. “Sometimes you have to spend money to bring people in.”

After discussion, Sikes asked for a role call vote. Aldermen Leon McNeal and Johnson, and Alderwoman Julie Jones-Coleman voted to adopt the ordinance while Lynch and Porter voted against. Porter said she voted against it because the firemen need more pay.

•The board approved to enter a lease agreement with Tennessee College of Applied Technology, Jackson to use the Humboldt Higher Education Center on Main Street. Terms of the lease are for five years at a rate of $1 per year.

Alderman McNeal had concerns about the lease and the potential of Humboldt City Schools’ Central Office moving into a portion of the classrooms. McNeal wanted to make sure TCAT Jackson was okay with sharing the space.

Dr. Janice Epperson, superintendent of Humboldt City Schools, was asked to address the city board regarding their plans to relocate the central office. Dr. Epperson said the state has made $1-billion available in grants and believes the school system could receive $750,000 over two years by adding classroom space back to Humboldt Jr./Sr. High School where the central office is currently located.

When the school was built in 1977, that area was the vocational department and Dr. Epperson wants to return that space for technical courses.

She added that TCAT Jackson and Humboldt City Schools already partner together for CTE courses and with all the new industry needs in West Tennessee, more CTE courses will be needed.

The board unanimously approved the lease agreement form with Tennessee Board of Regents on behalf of TCAT Jackson.

•Mayor Sikes made the recommendation to appoint Sandra Pruett to serve on the Humboldt Municipal Airport Board for a 5-year term. Pruett told the board she had wanted to serve on this board for a while but did not think it was proper while her husband, Bob Pruett, served as an alderman for Humboldt.

The recommendation was approved unanimously.

•Two names were submitted to serve on the Parks & Recreation Board. Mayor Sikes said he was asked to hold separate votes for each candidate.

Sikes introduced Greg Lenon as one of the candidates. Alderman McNeal motioned to have Lenon serve on the parks board, which was seconded by Alderman Lynch. Lenon was unanimously approved.

It was noted that Lenon has an invested interest in helping Humboldt’s youth by leading the youth baseball, softball and football programs as well as the Jr. Viking football head coach.

The second recommendation to serve on the parks board was Yahweh Yahweh. The mayor asked for a motion. After a brief silence, Porter made the motion. Sikes asked for a second, only to hear crickets for several seconds. He announced the motion died for lack of second.

•The final items on the agenda were the approval of the June police report and June fire report. Both reports were approved unanimously.