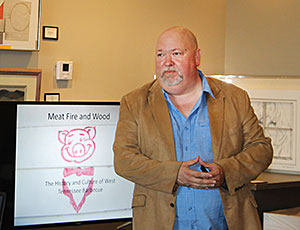 MUSEUM CURATOR – Tony Kail makes his first presentation as curator of the Humboldt History Museum for the barbecue exhibit reception. The display will be on exhibit for the next few weeks and focuses on West Tennessee barbecue.

The Humboldt History Museum is hosting a new exhibit that focuses on barbecue, particularly West Tennessee barbecue. “Meat, Fire & Wood, the History and Culture of West Tennessee Barbecue” exhibit opened last Tuesday at the museum and will be on display for the next several weeks.

A reception was held on July 12 with museum curator, Tony Kail, giving a presentation on the importance of barbecue in West Tennessee. Kail opened his presentation with a slide show that told how Presidents all the way back to George Washington used barbecue during campaigns.

Kail talked about how slaves brought their African cooking techniques and spices to put their own culture into their cooking. After slavery was abolished, these techniques and flavors became more prevalent when “BBQ Joints”, as they were called, opened by African-Americans. Much of these and other practices of cooking meats became popular in Memphis. Memphis was and still is known for its barbecue.

As families ventured out from Memphis, other areas such as North Carolina and Kansas City became well known for their own particular style of barbecue. But some moved a shorter distance from Memphis to places like Jackson, Brownsville and Humboldt.

Curator Kail spoke about some of the local eateries known for barbecue, all with that Memphis flavor but each would tweak the method of cooking meat to put their own stamp on barbecue.

Lastly, Kail focused on Humboldt barbecue and the families that made a name for themselves such as Pulliam’s BBQ, who had ties to Sam’s BBQ, and later became Armour’s BBQ. He spoke about the late Lavorn Jones who was known for her barbecue sauce. Kail recalled Jones telling him about a man in California, who wanted some of her sauce so they loaded up a box, drove it to the Jackson airport and shipped it to California. 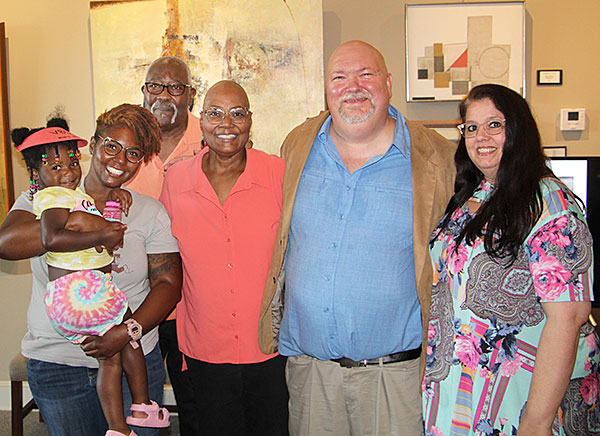 Today, Sam’s is the only remaining BBQ Joint left in Humboldt. Sam Donald created Sam’s BBQ but before he went into business for himself, he worked for Pulliam’s where he learned the trade. He built barbecue pits at Pulliam’s and later across the street where his restaurant is today. Mr. Sam’s daughter, Seresa Donald Tyler and her husband John Tyler took over the restaurant after he passed away. John helped Sam operate the pit and restaurant where he learned the ropes.

Kail has a passion for barbecue, which is one of the reasons his first exhibit at Humboldt History Museum was on West Tennessee barbecue.

After his presentation, guests were served—what else but barbecue. People feasted on samples pulled pork, barbecue bologna and pork rinds, all locally prepared from Sam’s BBQ and This Is It in Trenton.

Contact the Humboldt History Museum for business hours to view the exhibit that includes over 100 items. Kail will give you the stories behind many of the items on display.