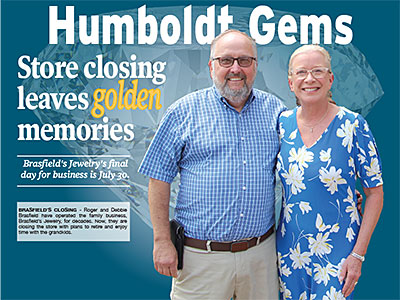 One of Humboldt’s downtown businesses will be closing its doors for good. Brasfield’s Jewelry owners Roger and Debbie Brasfield are riding off into the sunset of retirement and closing the family-owned business.

For 63 years, Brasfield’s Jewelry has been a staple on Main Street. Even though the store is known for its fine jewelry and exceptional jewelry repair, the couple said the secret to their success was the personal service customers had come to know over the years.

“Anybody can sell it cheaper, but the service is what keeps business going,” Roger said of their business philosophy. “People long for that kind of service.”

The final day of business will be July 30 but they will be in and out through August, just not open for regular business.

When asked if they would consider selling the business, Debbie said, “Of course! We would love to sell. But it has to be the right fit.”

That “right fit” in her eyes is a younger couple that would continue the Brasfield’s Jewelry tradition. Being a part of the community and continuing to serve the valued customers would come first and foremost. And if that person or persons does not come along, the Brasfield’s are content in their decision to close the business.

Brasfield’s Jewelry has a storied history. When Roger was a toddling two-year-old, his parents, Louis and Mary Brasfield, moved from Memphis to Humboldt in 1959. Mr. Brasfield bought Crider’s Jewelry, which was located on Main Street next to the Plaza Theater. This was the birth of Brasfield’s Jewelry. The business moved a block down the street to its current location in 1962.

Five years later after coming to Humboldt, tragedy struck when Mr. Brasfield died, leaving Miss Mary (as she was affectionately known) to operate the store while raising six children. Not only did the store survive, it thrived into one of the best-known jewelry stores in West Tennessee.

As a youngster, Roger worked part-time and during the Christmas season where he learned the ropes of operating the family business.

In 1983, Roger and Debbie tied the knot in wedded bliss and moved back to Humboldt to help run the family business. He learned how to repair jewelry, set stones, resize rings, repair necklaces and replace watch batteries. He quickly made a name for himself as one of the premier jewelry repairman in the area. Debbie also became a valuable member of the team with her charming personality and dedication to personalized customer service.

As the years continued, Miss Mary was still the monarch of Brasfield’s Jewelry. But she began turning the reins over to Roger and Debbie, who purchased the business in 1990. Even though Miss Mary no longer owned the store, she was still one of the faces of the business and came to work regularly until her health would not allow. She passed away on Christmas Eve of 2020 at the age of 93.

With his mother gone to Heaven, their kids grown with their own families, Roger and Debbie began contemplating retirement in order to spend more time with their grandchildren. Now just seemed to be the right time.

When asked what they will miss the most, without hesitation Roger stated, “The people. We’ve made lots of friends.” 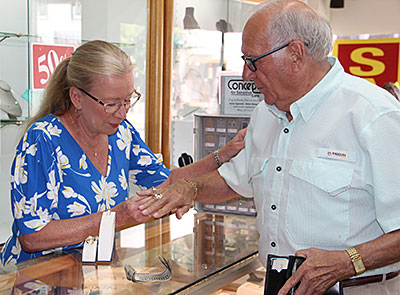 PERSONAL SERVICE – Debbie Brasfield assists Jack Robinson as he tries on a gold ring. Bradfield’s Jewelry’s personal service and knowing their customers are what separates them from other similar stores.

“It’s true,” Debbie added. “They are not just customers—they are like family. You are part of their lives. It’s not just about purchasing a piece of jewelry but sharing their lives. We need each other. We know our customers, the fit, what they want. You don’t get that on Amazon or eBay.”

Those who know Roger and Debbie, and frequent their store, see a couple that made Humboldt their home in every sense of the word. They worship here, their children went to school here, played sports and cheered here and were pillars in the community. Everyone knows Roger and Debbie, and Brasfield’s Jewelry.

A few years ago, the Brasfields moved to Martin to be near Debbie’s parents. They have been commuting back and forth to work each day. Even though they no longer live in Humboldt, Humboldt is and will always be home and in their hearts. They have thousands of wonderful memories made here.

“My favorite memories are Christmas time,” Debbie reminisced. “The window decorated with villages, people coming in, being part of those special occasions.”

Debbie recollected all the Friday cookouts before football games.

Roger had a humorous favorite memory, “Robert Paterson—he wore about 12 watches all the time.”

“Lyla Dee said her girls would say it’s not Christmas if they don’t get something from Brasfield’s,” Roger recollected of good friends and fellow Main Street business neighbors, Lyla Dee and Harry Davidson, who owned Peoples Furniture for years and years.

With retirement getting closer and closer with each passing day, Roger is looking forward to doing more hunting and fishing. Debbie said she plans to dabble. They hope to do some traveling. Roger said he has always wanted to go to Hawaii and that is one of the things on his bucket list.

“We always said we want to retire a little early while we are a little younger and still have our health,” Debbie said of moving into their golden years. “Some people wait too long to retire and aren’t able to do the things they planned because of their age and health.”-

“After much thought, consideration and prayer, Debbie and I have decided to close the store and retire,” Roger stated in the announcement of Brasfield’s Jewelry closing. “We have been so blessed in our 39 years of owning and working at Brasfield’s Jewelry. The people of Humboldt and the surrounding area have been so good to us. In addition to providing us a means to provide for our family, we have made so many great friends. Words cannot express how much these friendships mean to us. From the bottom of our hearts, thank you. Humboldt will always be out hometown.” 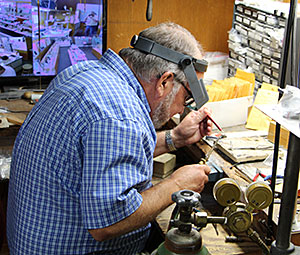 TEDIOUS WORK – Roger Brasfield has made a name for himself as one of the finest jewelry repairmen in the region. Brasfield’s Jewelry customers will have to find a new person for repairs with the closing of the store.

Between now and July 30, Brasfield’s Jewelry has put everything on sale as they draw nearer to the close of their family business.

Who knows, someone may stop in to pick up a piece of jewelry, fall in love with the store, and walk out as the next owner or owners of the “new” Brasfield’s Jewelry.

But if that does not happen, Roger and Debbie are perfectly happy to end this chapter of their lives. And what better way than spending the time with their adorable grands as their next 24-carat chapter begins.