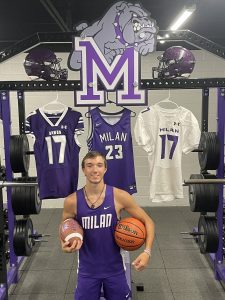 Milan’s Andy Westbrooks is the 2021-22 All-Gibson County male athlete of the year.

During his junior season, Milan’s Andy Westbrooks had the opportunity to do both.

Westbrooks was a three-sport athlete for the Bulldogs last year. He was the punter and kicker for the football team, he played a key role coming off of the bench and starting during parts of the basketball season and won a state championship and earned a third-place finish during the track and field season.

For his accomplishments, Westbrooks is the 2021-22 All-Gibson County male athlete of the year.

“We went from eight-win season last year to going to the state championship in basketball,” Westbrooks said. “That is a big turnaround. And no one was expecting that. Going in football my sophomore year was an experience of a lifetime. You can’t replace things like that. Something I will always cherish. And then I got to go to state in track and win a state title.”

Last season, Westbrooks played for the Bulldogs football team that played for the Class 3A state championship.
He continued this season to take care of the kicking duties and averaging around 40 yards per punt.

When the season ended, Westbrooks was made aware of the fact that would step into the starting quarterback role for the 2022 season. So as the winter and spring progressed, he also had to put in work to be ready to take over those responsibilities.

During the basketball season, the Bulldogs went on a run to the Class 2A state championship with a 18-game winning streak. He averaged 5.2 points and 2.4 rebounds.

“Our opening loss to Crockett County, we thought we were going to be pretty good and we got beat,” Westbrooks said. “It was a blow. The next day, we hit the gym and practices kept getting more intense.”

Then came track and field season. Westbrooks had already made the state meet in the long jump in 2021. He repeated that in 2022 and finished third in Class A with a distance of 21-feet.

In March, Westbrooks added a new event in track with the high jump. Two months later he won Milan’s first track and field state title in boys since 1981 as he leapt a height of 6-feet, 8-inches.

Westbrooks credits his coaches with helping him make those transitions from season to season throughout the year.

“My coaches are really understanding – Coach (Derek) Carr, Coach (Jason) James and Coach (Edgar) Willis are good on how to share time,” Westbrooks said. “It is pretty easy for me to go to all of the practices. If football is the next season coming up, I might put extra work in after practice at football and then get my work in there. When it is basketball season, I get back in basketball shape.”

While we are in the summer now, Westbrooks is hastily working on his craft to make sure he is ready to excel during his senior year.

“My goals are grades come first, so I want to keep my GPA up,” Westbrooks said. “Sports comes next, so I would love to win a state championship in football, basketball and track. Since football is next up, I am going to work my tail to make sure this team is prepared.”

Ross Crenshaw (South Gibson, Sr.): Crenshaw was a two-sport athlete for the Hornets, earning a spot on the All-Gibson County team in both football and soccer. He was a running back and defensive back on the football team, recording 482 yards and five touchdowns rushing along with 50 total tackles with one tackle for loss as the team reached the Class 4A quarterfinals. In soccer, he recorded 16 goals and eight assists as the Hornets reached the Class AA quarterfinals.

Kylan Johnson (Humboldt, Sr.): Johnson was a two-sport athlete for the Vikings, earning a spot on the All-Gibson County team in both football and basketball. He had 1,779 total yards of offense with 1,194 passing yards and 585 rushing yards to go with 21 total tackles. In basketball, he averaged 17.7 points, 4.8 rebounds and 3.2 assists.