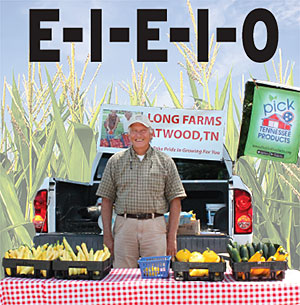 LONG FARMS – Randy Long of Long Farms is set up to sell his vegetables at the Humboldt Farmer’s Market at Bailey Park.

The Humboldt Farmer’s Market is officially open for the season. The market began the last Saturday in June and will conclude on the last Saturday in September. It is open to the public Tuesdays, Thursdays and Saturdays from 8 a.m. to 3 p.m. or until they run out of the goods they are selling.

On Tuesday, June 28 three local farms were selling fresh vegetables and homemade products at the farmer’s market located at Bailey Park. All three of the farms/farmers are members of the Pick Tennessee Products Program that is designed to help people connect to Tennessee farms all across the state.

Long Farms located in Atwood, Tenn. was one of the vendors selling at the Humboldt Farmer’s Market last Tuesday. The farm is owned and operated by Randy Long and his wife, JoAnn. Long used to sell the fruits of his labor at home from the farm, but he ventured into the farmer’s market scene around three years ago.

“We just had so much stock [of products], it had to go somewhere,” Long explained of the decision to sell Long Farm’s vegetables in Humboldt, Milan and Atwood farmer’s markets.

Long Farms sells a variety of vegetables including various peppers, squash, tomatoes, okra, cucumbers, etc. Most of their produce is under $3/lb. Long Farms rotates Saturdays between Humboldt and Milan farmer’s markets. 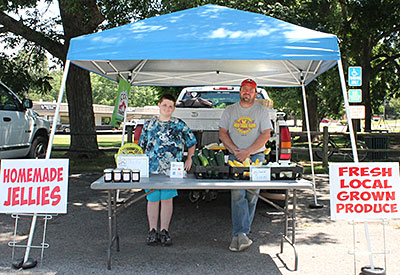 MUD CREEK FARMS – Robert Gilliland and his stepson, Kylan Fults (left) sell their goods to consumers at the farmer’s market in Humboldt. Gilliland only grows and farms as a hobby and stress reliever from his day job as an EMT.

Mud Creek Farms out of Dyer, Tenn. was also at the Humboldt Farmer’s market on June 28. Robert Gilliland, the owner, has been farming for only five years, but described it as one of his favorite hobbies.

“It is a stress reliever. I am an EMT for my day job, and it [farming] helps me put away all of the bad stuff I see,” Gilliland mentioned when talking about his reason for stepping into becoming a grower and selling at farmer’s markets.

Gilliland was at his stand with his step-son, Kylan Fults. They had already sold out of most of their produce around 11:30 a.m., including their jars of homemade jams. Gilliland said once he sold out of the jams for this season, it might be the last of it he will make until next year. Mud Creek Farms only sells at Humboldt Farmer’s Market.

The third in vendor in Humboldt for last Tuesday was Bobby Bland Jr. with Bland Farms from Medina, Tenn. There to help him was his wife, Kathryn Bland and their daughter, Brionna. Bland Farms was started by Bland’s father, Bobby Bland Sr. in the 70s. Bland said his father was one of the first farmers to sell their goods at the Jackson Farmer’s Market after they moved from selling out of a church parking lot. He mentioned his father is around 84 years old now and still loves seeing the work of the farm.

“I’m not trying to get rich. It keeps dad’s mind together,” Bland spoke about the reason he keeps the 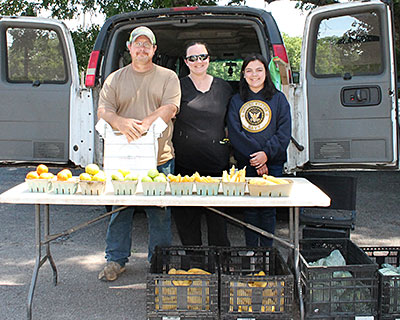 BLAND FARMS – The Bland family, including Bobby Bland Jr. (right) and his wife, Kathryn (center) and his daughter, Brionna, are at the Humboldt Farmer’s Market every Tuesday, Thursday and Saturday selling homegrown goods. He keeps the farming alive to help with his dad, Bobby Bland Sr.’s, spirits because he used to own the farm and loves the markets.

farming going and why they still sell at farmer’s markets.

Bland talked about the style of farming they use on their farm, calling it “old” in that they do things the traditional way from the past. There is no plastic or drip tape and they water all their vegetables by hand. He takes pride in everything he sells being actually homegrown and local. He said besides his normal vegetables, he should have some watermelons for sale soon.

The Humboldt Farmer’s Market was put together by the Humboldt Chamber of Commerce and is open for all vendors selling fresh, locally grown produce, homemade baked goods, canned items, local meats and handmade crafts. The market space is available at Bailey Park for the entire run from June until September for $15 per vendor.