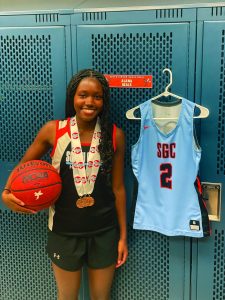 When asked how she makes it through three sports seasons during a single school year, South Gibson junior Alana Seals replied that it had a lot to do with her coaches led by girls basketball coach Catie Embrey.

Seals seems to transition with ease as she went from a strong cross country season in the fall, helping lead the Lady Hornets’ basketball team to the Region 6-3A semifinals in the winter and competing in the Class AA state track and field meet in three events in the spring.

Her ability to excel in all three of those sports has earned Seals the 2021-22 All-Gibson County high school girls athlete of the year honor.

“It is mainly the people that support me that make it possible,” Seals said. “It is the coaches, especially Coach Embrey, who is supportive in everything that I do. And it is my parents, and them pushing me to do my best in every sport.”

Her year began with cross country and she had multiple top-10 finishes throughout the regular season. In the Region 7-AA race, she finished 18th with a time of 23:28.57 to barely miss out on the state meet.

During the basketball season, Seals went under a change in coaching as Embrey took over for Carla Wyatt, who stepped down to take care of her son. And the Lady Hornets had no seniors.

But South Gibson battled some of the top teams in the state to reach the region semifinals. Seals averaged 10 points, 4.5 assists and 3.5 steals. She was named to the All-Gibson County girls basketball second team.

“It was a great season,” Seals said. “Coach Embrey is a great person, and I love having her. The atmosphere that she created with the players and coaches made everyone feel at home.”

During track and field, Seals was consistently fighting for the top spot in meets. She advanced to the Class AA state meet in three events after no South Gibson track athlete reached the state meet last season.

“It was stressful making it in three events,” Seals said. “It was nerve-racking and my hands were sweating the whole time. Having Faith (Reed) up there with me was helpful and comforting.”

With one year remaining in her high school career, Seals wants to continue to improve in all three events with state championships as the ultimate goal.

“I think I am improving,” Seals said. “Last year, I felt like I was the third option, but Coach Embrey has helped me gain confidence, and that has helped a lot.”

Madison Hart (Gibson County, Sr.): Hart was a two-time finalist for the Class 2A Miss Basketball as she helped the Lady Pioneers reach the state tournament all four years of her high school career. Hart is fourth all-time in program history with 2,020 points. As a senior, she averaged 19 points, nine rebounds, three assists and two steals. Hat has signed to play college basketball at Bethel University.

Mary Ellen Montgomery (Milan, Jr.): Montgomery excelled on the volleyball court and softball field for the Lady Bulldogs. She is a middle hitter on the volleyball team as the program broke the record for wins in a season. She recorded 205 kills, 52 blocks, 49 aces and 45 digs. She is also a dominant pitcher and hitter on the softball team that finished third in District 12-2A. She won eight games this season and recorded 116 strikeouts in the circle. She also batted .410 with four home runs.