CUTS THE RIBBON – David Blackwood, director of the West Tennessee River Basin Authority (holding scissors), cuts the ribbon to officially open the Middle Fork Bottoms Recreation Area last Tuesday morning, June 21. The recreation area has been five years in the making from the purchasing of land, engineering, dirt work and other development. With Phase 1 complete, Phase 2 is underway and should be completed in 2023 with Phase 3 and Phase 4 beginning afterwards. The recreation area has five miles of paved walking trails, 10 lakes and a channel for canoeing and kayaking.

One of the areas newest and largest recreation sites held a ribbon cutting Tuesday, June 21, officially marking its opening. Then on Saturday, June 25, a grand opening was held. The Middle Fork Bottoms Recreational Area is now officially open to the public even though people have been visiting it for months.

Located in Madison County and Three Way, Tenn., the recreation area is 850 acres with numerous lakes/ponds, five miles of paved walking trails, wetlands, and a channel for canoeing, kayaking and paddle boarding.

Several dignitaries attended the ribbon cutting last Tuesday. Saturday, the recreation area was bustling with excitement. Vendors were set up, food vendors were on hand, golf cart tours around the area were available and visitors were kayaking on the big lake, and biking and walking on the trails. 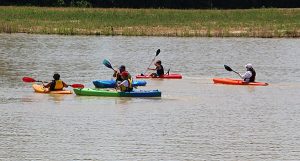 Blackwood offered an overview of the project, which began five years ago when the National Disaster Resiliency Competition awarded money for flood risk management. He said Phase 1 is completed and was the biggest phase of the overall project.

Mayor Sanders briefly spoke to the crowd attending the ribbon cutting. He said the city has plans to do repairs to Sanders Bluff Road including repairs of some culverts and paving the street from Hwy 45 to the main entrance of the recreation area. This drew applause from those who have driven that stretch of road.

Sanders said he knows how this property has been prone to flooding regularly since he has lived in the community his entire life.

Nature Conservancy Director of Protection Gabby Lynch talked about the process of attaining the land for the recreation area. She said there were a few landowners that owned the majority of the 850 acres and a few others with smaller tracts of land. She was amazed at how quickly they were all on board with the project.

Lynch said the combination of flood control and recreational activities is a win-win for the community.

Blackwood said Phase 1 included purchasing the land, coming up with a plan, engineering and finally, construction. Dirt work entailed creating approximately 40 acres of lakes/ponds and the oxbow channel that mimics a meandering stream. Bridges were constructed over the channel and ditches, with a larger bridge that spans the Middle Forked Deer River. The walking trails and path were completed in Phase 1. The cost of this portion of the project was $5.8-million.

Blackwood said Phase 2 is just now getting underway and should be completed in 2023. This portion of the project will include restroom facilities, a trailhead, overlooks and signage. This winter, TWRA will stock the two fishing lakes. Phase 2 comes in at a cool half-million dollars.

Phase 3 originally included constructing a welcome center. Those plans have changed. Now, a boardwalk through the wooded area will loop around south of the big 10-acre lake is one of the main parts of Phase 3. The welcome center and parking lot will be pushed back to the recently created Phase 4. For this phase to come to fruition, there would need to be a private/public partnership.

Blackwood said the newly-formed organization, Friends of the Middle Forked Bottom Recreation Area, is in the process of becoming a 501(c)3, which will seek corporate and public fundraising opportunities as well as applying for grants to fund Phase 4.

Another project in the works that is not technically part of the Middle Fork Bottoms Recreation Area project is TWRA putting in a boat ramp on the Middle Forked Deer River. Blackwood said there would be a parking area next to the Hwy 45 river bridge. The ramp and parking will be inside the recreation area but will be a totally different project. Another ramp on the river, about 16 miles downstream, is planned for Horns Bluff in Crockett County, giving canoe and kayak enthusiasts a place to put in and to take out.

Blackwood believes there is the potential for more phases or improvements to the Middle Fork Bottoms Recreation Area and the surrounding region. Some possibilities for the area could be a hotel with a conference center, restaurants, canoe and kayak rentals, bait shop, and any number of commercial or retail opportunities. The possibilities are endless. 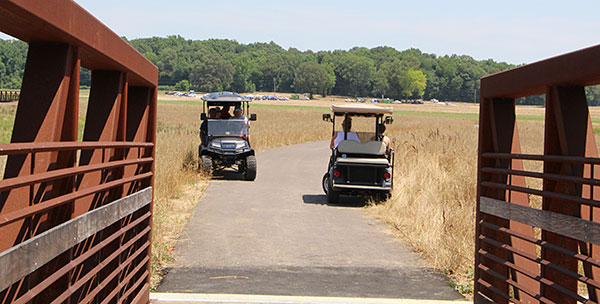