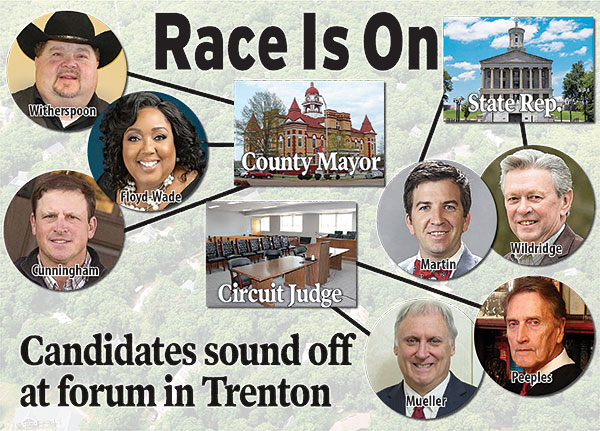 Candidates for offices representing Gibson County on both the local and state level had the opportunity to address voters last Tuesday night, taking part in a political forum hosted by the Gibson County Adult Leadership Alumni Association.

All candidates in county-wide elections were invited and were given five minutes to speak. Their comments are listed in the order that they spoke. Their full comments can be heard on the Gibson County Candidate Forum Facebook live stream, shared by the newspapers of Gibson County Publishing and the Victory 93.7. All voters are encouraged to watch the videos and listen to the candidates speak for themselves. 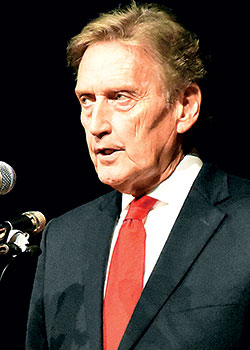 Clayburn Peeples
Incumbent Circuit Court Judge Clayburn Peeples stated that his court, which handles all of the felony cases in Gibson County, Humboldt, Crockett County and Haywood County, has adjudicated close to 15,000 criminal cases and more than 5,000 civil cases since he first took office in 2001.

“When I go campaigning and ask people what they want most in their circuit judge, I hear one word over and over and over,” Peeples said. “Fairness. And they’re right. Life may not be fair but, by George, judges ought to be. For the past 21 years, I’ve been honored to be your circuit judge, I’ve made my primary focus and my overarching goal to treat every single person who comes to circuit court, be they victim, defendant or civil litigant, fairly, professionally and competently.”

“If you or somebody you love find yourself in circuit court, you’ll want many things from that judge,” Peeples continued. “You’ll want somebody who listens to all sides of the case and you’ll want somebody with the experience and the expertise to evaluate the facts correctly, but mostly you’ll want someone who will decide the case fairly and competently, without regard to political considerations or personal influence or anything other than fairness and equity.” 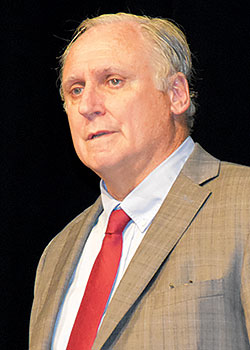 Jeff Mueller
Mueller, who has served as the Trenton city judge for almost eight years, stated that he has worked for state and federal courts, arguing criminal and civil cases for 27 years.

“Different judges do different things,” Mueller said. “I’ve been able to grasp one thing here and another there to figure out what would work best in our district for our folks. I’d like to think that I’ve got the knowledge, experience and energy to go there and do this job very well.”

Mueller outlined his judicial philosophy for the voters in attendance and watching at home using Micah 6:8.

“I want to follow the law. I want to treat people with dignity and respect, and I will try to do the right thing,” Mueller said, quoting the scripture. “The Lord has shown you goodness. He’s shown you the way. Now, go forth, do justice, show kindness and be humble. I actually have that taped on the bench. That’s really good advice for your life and for carrying out matters of the court.” 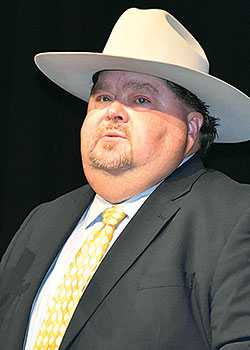 “That night we were handed a diploma and made a promise that we would take that diploma, put some hard work with it and make a good living here in Gibson County. The night that promise was made, it was true,” Witherspoon said. “In the next 25 years, you watched, I watched, as factory after factory closed. Business after business shuttered. People laid off. Lives destroyed. It seemed like a nightmare that would never end. Everybody was affected by it. You were, I was or you know somebody that was.”

Witherspoon said that when he was asked to run for the office, he vowed to turn the economy around and bring jobs back to the county. After getting the county’s finances in order, Witherspoon directed efforts to bolster the county’s workforce and industrial park.

“Since that time, we’ve flourished,” Witherspoon said. “Gibson County is moving. We’re on a roll. We’ve landed not one but two Fortune 100 companies and the county’s bringing in 2,015 jobs with benefits to that park. We’ve got a great team in this county. We make good things happen, but we shouldn’t take these things for granted. It can turn the other way as fast as we got it here. I don’t want to go back to those days. I don’t want to keep seeing our kids leaving the county to find work elsewhere. If you’ll honor me with your vote on August 4, I will never, ever, let that happen to Gibson County again, so help me God.” 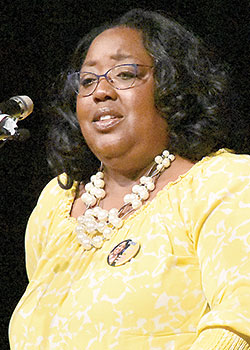 Tammy Floyd-Wade
Tammy Floyd Wade, a longtime alderwoman for the city of Milan, was nominated by the Gibson County Democratic Party at a caucus earlier this year.

“I’ve served on several boards and committees in the community,” Floyd-Wade said. “I started this journey a long time ago, being a community advocate, and I’ve learned as I walked this community and worked with children and families, so many things are important. The safety of our communities, the safety of our county.”

Floyd-Wade said she has been active in housing organizations, the healthcare foundation, the Gibson County Imagination Library and Women in Municipal Government.

“If given the opportunity to serve as your county mayor, I’m ready to lead and move forward with what is important in this county,” Floyd-Wade said. “With me, safety is first. If you have a base of safety, then you will be able to build strong families in your community and your county. I will provide you with the experience and the leadership that I’ve learned over the years to provide the resources that are necessary in the community for growth.” 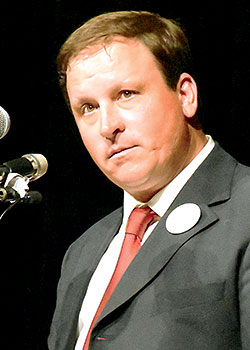 “I’m running for county mayor because Gibson County needs a leader that can unite our county,” Cunningham said. “We need a mayor with a shared vision for the future of Gibson County.”

Cunningham stated that he would focus on unity, forward thinking and fiscal responsibility. He also stressed the importance of keeping tax dollars in Gibson County and balancing the county’s spending.

“I want to bridge that gap between the north and south of the county, creating common goals, shared experience and focus on what brings us together. Unity is crucial to achieve success. I’m not afraid to go beyond what’s considered conventional in order to grow Gibson County. We must be constantly looking for an opportunity and then figure out a way to make it a reality. Having an accurate, achievable budget is imperative for our county. Together we can work towards goals of fiscal responsibility to create investment, innovation and growth. Being a county commissioner for the last 12 years has given me an in-depth understanding of county government, our strengths and our opportunities for improvement.” 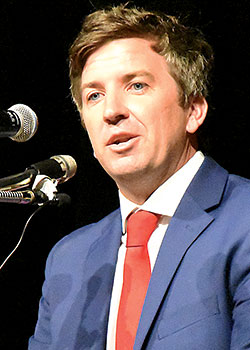 Brock Martin
Dr. Brock Martin, a chiropractor based in Huntingdon, is seeking the Republican nomination for the District 79 seat in the Tennessee House of Representatives. Dr. Martin spent several of his formative years in Gibson County with his grandparents, and is a graduate of WestStar Leadership and Delta Leadership. He has also served on the Finance Committee at Bethel University and as treasurer of the Huntingdon Industrial Board for the last four years.

“During that period, we’ve been able to add over 400 new jobs and 300 existing jobs just in Carroll County. Leadership matters. It makes a difference in our community.”

In his role as president of the Tennessee Chiropractic Association, Dr. Martin worked with legislators to pass a bill to reduce healthcare costs, increase access to healthcare and decrease opioid use across the state.

“Working together with legislators to learn how to do that gives me a unique perspective on how things work in Nashville and how we can bring that back to benefit our district,” Dr. Martin said.

Dr. Martin stated that he was pro-life and noted that he would like Tennessee to become the most adoption-friendly state in the country. Dr. Martin supports protecting Second Amendment rights and stands with law enforcement, the military and the agriculture industry in West Tennessee. He also added that he supports public schools and teachers, and wants to see investments in Early Childhood Education, teachers, public schools and institutions of higher education.

“In my background as a doctor, listening to people and creating solutions is what we do,” Dr. Martin said. “As your representative, I will do the same thing: listen to your concerns and work to find solutions. If I can’t find the solutions, I will work with other legislators across the state to find things that are specific to our area.”

“My ‘why’ for running is simple,” Dr. Martin concluded. “I’m running to create a more prosperous future for our families, for our businesses and for all communities in District 79. My commitment to each of you tonight is that I will always be visible, accessible and always working to be your conservative voice and the voice for our future generations in Nashville.” 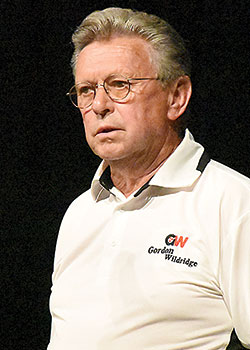 Gordon Wildridge
Gordon Wildridge, currently a Lexington resident, was born in Milan and lived there for 13 years while working at the Milan Arsenal. Wildridge also served with the National Guard in Milan and Trenton for a total of 22 years. A small business owner, Wildridge is currently serving his third term as an alderman in the city of Lexington.

“I worked with the county mayor, the city mayor and made all kinds of offers until we finally hired a recruiter to get the [industrial] site kicked off and get it going,” Wildridge said. “We understand that the life blood of a community is industrial development so you can have a tax base to build these schools and have revenues that you can spend to have these jobs for the people. We grew up here, we have our family here. We don’t want them to move on. Blue Oval [City] is going to be a gamechanger for this vicinity. People are looking around now trying to find property, trying to find a place to put a business up, because the anticipation is getting higher and higher every day. We’re going to have to work hard to do this. The state is going to have a big hand in this. The state is what kicked off. They dumped it in our laps and now we’ve got to deal with it. What we have to deal with is how we’re going to compile and make this work for us.”

“This is one district that I know very, very well,” Wildridge said. “I believe it’s very important that we support our local schools. I am also pro-life and pro-Second Amendment.”