The Juneteenth celebration had a successful turn out at Viking Park where the attendees played games, shopped and ate food at several black owned and operated business vendors. There were also musicians performing for the crowd throughout both days as well.

Valerie Porter, coordinator of Humboldt’s African American Music Festival, was present at the event welcoming everyone to the celebration and sharing laughs and fun with those 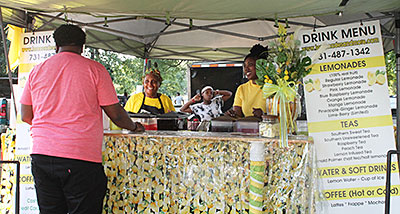 WHEN LIFE GIVES YOU LEMONS – Pam Poston is serving lemonade to an attendee of the Juneteenth celebration festival on Sunday, June 19.

around her. Pam Poston, Porter’s sister and fellow coordinator, was one of the vendors at the festival. She ran a lemonade stand in the center of the event.

The decision to move the celebration to Viking Park instead of 6th Street Park, where the festival is usually held, proved to be a smart decision. The shade provided by the trees at Viking Park allowed the celebrations to continue without the sun and the current heat wave putting a damper on the festivities for those that attended.

Juneteenth is a holiday that has been celebrated unofficially for many years as a day of freedom, just like Independence Day. The day was officially recognized as a federal holiday on June 17, 2021.

The festival was sponsored by The Stigall Center, a non-profit 501(c)3 organization. 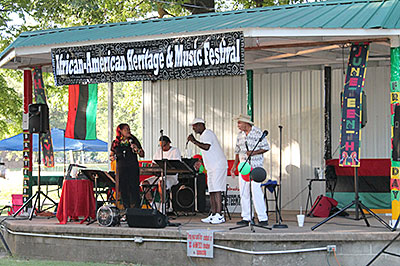 MUSICAL CELEBRATION – Bands and other performers took to the stage at Viking Park at the African-American Heritage and Music – Juneteenth festival in honor of the national holiday.