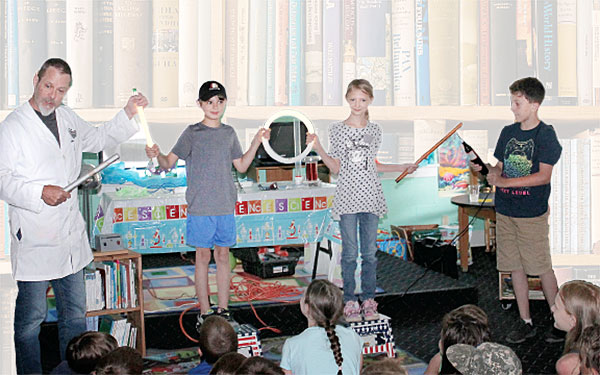 SHOCKING SCIENCE – During the opening summer activity, “Mr. Bond’s Science Guys,” Logan Proctor (far right) holds a Tesla Coil to deliver electricity through the copper pipe held by Addison Gilchrist. The electricity traveled through Gilchrist’s hands to the glass light bulb she is holding with Tyler McNatt, causing it to light up. The electricity then moves into the other bulb McNatt is holding and begins to light with the help from an additional copper pipe held by John Wicks (Professor Greybeard), who is teaching the children about the electromagnetic field. The kids are standing on stools so the experiment works and the electricity will not immediately through them into the ground.

Reading a book is an inexpensive way to venture out on a vacation without the inconvenience of leaving home. A reader can scale vast mountains, sail across the seas and explore the great wide somewhere over the course of several hundred pages and half a day’s worth of reading.

This summer, the Humboldt Public Library is adding to the adventure and wonder of reading by making ‘waves’ for readers ages zero to 99-plus with their “Oceans of Possibilities” summer program, which is ‘shore’ to be a shipload of fun.

The start of the summer series bolted out of the gate last Wednesday, June 1 with an electric presentation conducted by a positively, quirky scientist. John Wicks, or Professor Greybeard as he had the kids address him throughout the show, shocked the children and parents at the “Mr. Bond’s Science Guys” library event with his magnetic energy and powerful experiments. 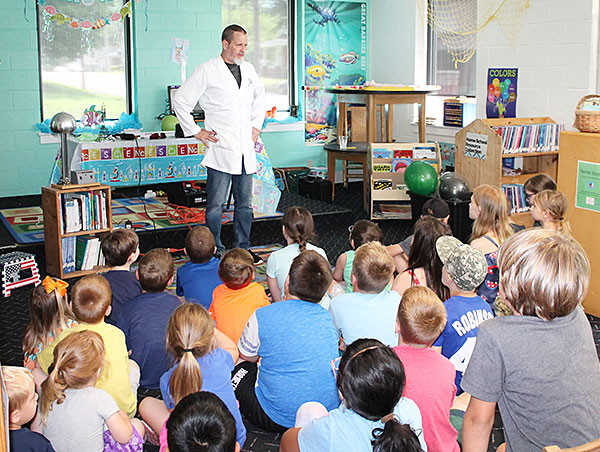 SCIENCE RULES – John Wicks or Professor Greybeard (center) greets and goes over the rules with the children at the “Mr. Bond’s Science Guys” summer program event at the Humboldt Public Library.

Over the course of an hour, Wicks demonstrated how electricity maneuvers currents by manipulating the charged particles through the air, objects and/or people to eventually become grounded. He called on volunteers to hold copper pipes and glass light bulbs while another volunteer delivered electricity from a hand held tesla coil into the pipes so everyone attending could witness the electricity passing through the glass and lighting the bulbs in the kids’ hands.

He also showcased a magnet’s ability to repel objects against the weight of gravity by utilizing the law of inertia, which states an object that is in rest or motion will remain in its initial state unless an external force introduced to alter the state.

The external force in the example Wicks showed the children was the differing polarities of the magnet and the metal object placed upon it. He explained to the attendees that this would be a good way to deliver objects through space. 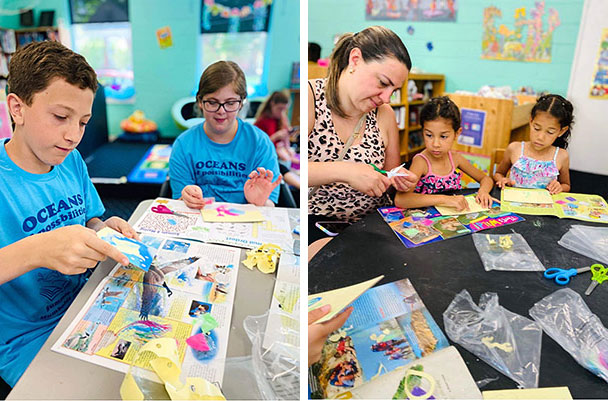 For the entirety of summer with the meticulous planning from Children’s Librarian Ashley Niven and Library Director John Blankenship, the Humboldt Public Library will host different activities nearly every day, like the STEM event with Wicks. These activities for children, teens and tweens will include arts and crafts, character readings, games and more. Adults are also welcomed aboard to enjoy crafts, cooking classes, movies days and bingo throughout the summer as well.

Another way to stay involved is to grab a reading log from the library to document the books read over the summer. For every book read, there is an opportunity to win a prize and be entered to win the grand prize.

Readers of all ages should drop their anchors at the Humboldt Public Library over the course of the summer to ‘sea’ what ‘shell’ be a ‘whale’ of a time.