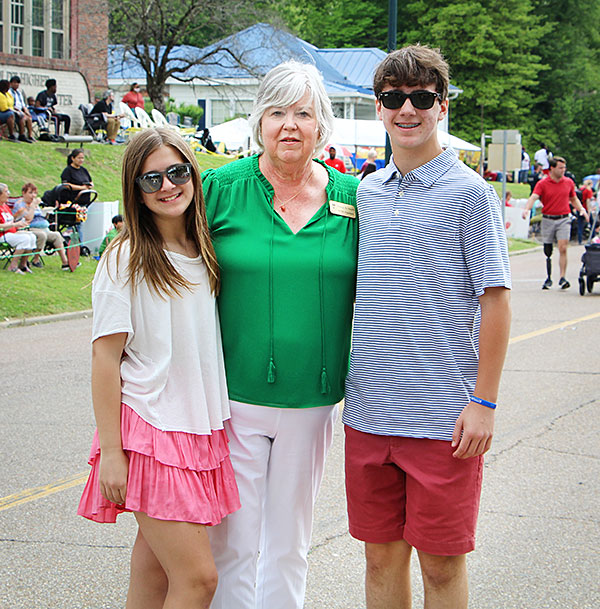 Another week of berry sweet fun has come to an end as all of Humboldt sadly put away their expansive collections of strawberry decorum and said goodbye to the 84th annual West Tennessee Strawberry Festival. With another year of the festival gone, it was time to close the chapter on the reigning strawberry President Sherry Jo Smith. Smith did her duties with a smile and served all of Humboldt and West Tennessee proudly with her time as the cherished position of President. As of Sunday, May 8 she passed the baton to her General Chairman, Shane Lynch, and is excited to step back into her role with the strawberry festival pageants for the following year.

Her time as President was spent learning how to navigate the inner workings of the festival and truly get a glimpse behind the curtain at how this historic event comes together every year. She and Lynch along with Chamber of Commerce Event Coordinator Beth Culpepper met throughout the year prior to the festival to contact sponsors, plan events and complete other tasks to get the famous strawberry week up and running.

“At first we started meeting once a month, and then we went to every two weeks. Then closer to the festival we meet every week,” Smith described of her obligations. “We went to Gibson one night to watch a cornhole game to see if that is what we wanted to add. We go (with a travel float and the queens and their courts) to the Soybean festival, the Jackson Christmas parade, the Fish Fry, the Teapot Festival, and then that kicks off our strawberry week.”

The week went practically without a hitch and the citizens of Humboldt as well as all of West Tennessee came together to enjoy the fruits of Smith’s labor. Now that the festival is complete and the strawberries have been culled, Smith spent the past week resting and basking in the glow of a job well done.

“What was special about being president [of the festival] was my daughter was president and it was good because now I’ve followed her. It was an honor.” Smith proudly explained.

A president is nothing without their right hand man, and for Smith that was Shane Lynch. He will be the president for the 85th West Tennessee Strawberry festival. Lynch spent the past year learning from Smith and now has the difficult task of following in her footsteps. While he does not have his own general chairmen selected yet, it has been reported that he does have a list of potential people he might choose.

“I couldn’t have made it without him (Lynch)” Smith gushed about her general chairman. “I hope for Shane, whoever he picks for general chairman, I hope they are as good to him as he was to me. Shane will do [so well]. He loves Humboldt.”

Without the sponsors, volunteers, and the citizens of Humboldt who keep this historic tradition alive, none of this would be possible. To engineer an essentially free week for those all over the country to revel in takes a great deal of planning, dedication and time from those who hold Humboldt, and the strawberries that are the city’s lifeblood, steadfast within their hearts.  Smith will now take her place in history amongst those who came before her.

“I just want to say thank you to Humboldt for always being here and always supporting us like they do,” Smith spoke with a thoughtful smile.