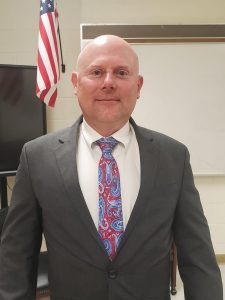 Gibson County has found its new high school football coach for the 2022 season in Charles Rogers.

“I knew there was a lot of potential here, and I had a few coaching buddies reach out to me and tell me that I needed to take a look at this,” Rogers said. “They knew I was trying to get a head coaching position, and (Haywood head football coach) Chris Smith sent me in this direction. I liked what I saw and thought it would be a good fit.”

This is Rogers’ first head coaching job, but he has had multiple stints as a defensive coordinator, including schools in West Tennessee.

“This is my second career,” Rogers said. “I started this when I was 45, and I knew that if I wanted to become a head coach, it needed to come sooner rather than later. I couldn’t sit back as an assistant for 20 years like many do.”

Rogers comes to Gibson County from Bob Jones (Ala.), where he was the co-defensive coordinator.

“I have been round of a lot of good coaches — hall of fame coaches, multiple state championship winning coaches and of course with Coach Smith and (Haywood assistant) Coach (Logan) Rebstock,” Rogers said. “You learn how a program should be run. I have been very fortunate to be around successful programs and successful coaches, and I have tried to soak it all up.”

Gibson County went 22-37 in the six seasons that Finley was in charge. The Pioneers went 2-6 last season, missing out on the Class 2A playoffs.

“We are not looking backwards,” Rogers said. “We are looking at today and the future. We are going to set our foundation and do things that I have in my mind to be positive and the sky is the limit.”

The Pioneers are already in spring practice, and that wraps up later this week. Rogers is ready to get in, observe and then start laying that foundation.

“This month I want to meet the guys, observe the guys to see where I need to focus my attention and what I have on the field,” Rogers said. “Then we will go from there. I have to build a staff, and that will determine the way I go with an offense and defense.”

Rogers spent four years in the U.S. Marines after college.

“Sacrifice, discipline, no excuse, just get the job done, no matter what it takes,” Rogers said about how the Marines has impacted his coaching career.

Gibson County opens the 2022 season on Aug. 19 at Obion County. The Pioneers will also play the defending Class 2A state champions Westview in the Region 7-2A opener on Sept. 2, which is also the home opener.