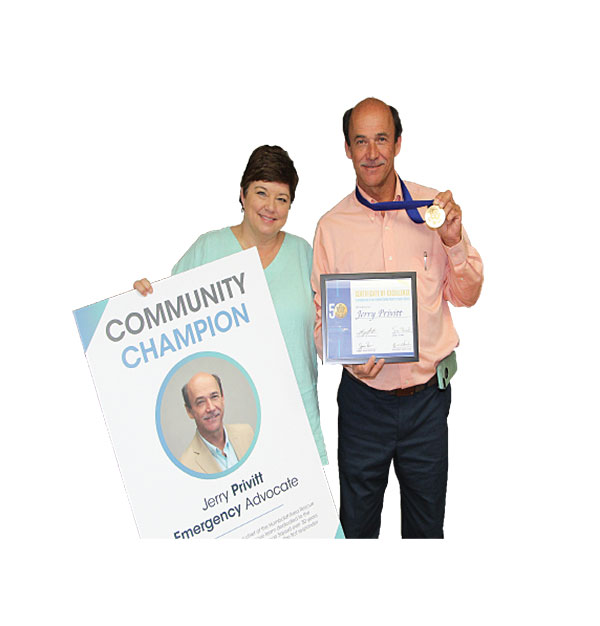 JEFFERSON AWARD RECIPIENT – Jerry Privitt is the recipient of a Jefferson Award where he received a certificate and medallion, along with a community champion poster from the Multiplying Good ceremony held last month at the Carl Perkins Civic Center in Jackson, Tenn. Privitt is joined by his lovely wife, Mitzie.

One of the area’s most decorated volunteers was recently rewarded once again for his dedication to helping others. Jerry Privitt was among 11 recipients receiving Jefferson Awards during the annual Multiplying Good ceremony this year.

Privitt is co-founder of the Humboldt Area Rescue Squad. HARS answers around 175 emergency calls each month. Working on call 24 hours a day, these professionals may answer a few call some days. these professionals may only answer two or three calls. The average day will be around six or seven calls, while other days there could upwards or 10 or more.

“The Jefferson Awards honors community champions who are “ordinary people doing extraordinary things without expectation of  recognition.” The awards are given at both national and local levels. Since May 2018, a new honoree has been selected each month locally. Recipients are nominated by their peers and selected by the Jefferson Awards/Multiplying Good committee members of West Tennessee,” as stated in their official press release.

“I was on my way to work when I got a call from Ms. Jelks at WBBJ,” Privitt recalled of when he found out he had won the award. “She told me I had won and wanted to do an interview. We met at the Rescue Squad. I brought in a few Rescue Squad people who have worked a long time, David Gitterman, Trey Lynch, the chamber and Andy Rice.”

Rice and Privitt started the Rescue Squad. Gitterman was Privitt’s fire chief who actually died while sitting in his chair and Privitt brought him back to life. Lynch was in a serious accident that the rescue squad worked, potentially saving his life as well. 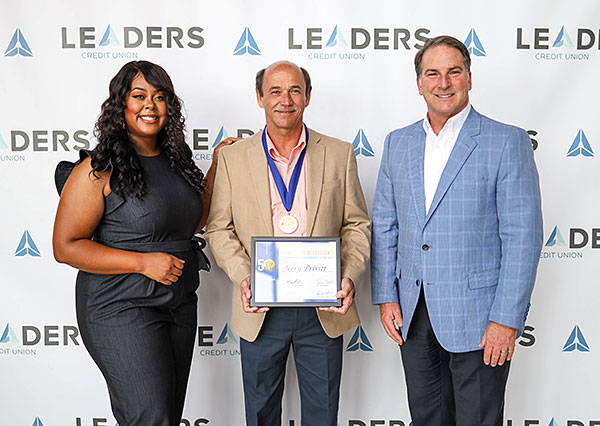 But it was toward the end of the Multiplying Good ceremony when the announcement was made that one of the 11 winners had been chosen to go to the national conference. Privitt was selected as the national nominee of the Jacqueline Kennedy Onassis Award for outstanding service benefiting local communities as a private citizen. He will now attend the national Jefferson Awards held in Indianapolis, Ind. in June.

“At the end of the program, they announced one of us would be going to the nationals,” Privitt noted. “They had the winner’s name in an envelope just like the big award shows on TV. When they called my name, I was floored. When they did the interview, I was so in shock I couldn’t hardly talk. I was at a loss for words. I was blown away.”

Privitt knows how important the Jefferson Awards are. He said they select one person each month and make a video. All of these people give back to their communities. They come from all walks of life, Privitt said.

As humbled as Privitt is to be a Jefferson Award recipient and being named the candidate to attend the national conference, he said he owes it all to his parents.

“My dad (Earl ‘Paw’ Privitt) taught us how to make a difference in other people’s lives,” Privitt said. “That’s how we were raised and we’ve been doing it a long time.”

HARS first formed in 1989, but it was the brainchild of Privitt back in 1988. Humboldt policeman, Danny Lewis, was killed in a car wreck on the Hwy 45 Bypass. The closest ambulance was in Dyer, Tenn. It was this accident that spurred Privitt to act. Privitt said he and Rice talked about the need for providing emergency care for Humboldt and the surrounding area. They put their plan in action and began soliciting funds from local businesses. The Humboldt Area Rescue Squad was born in 1989 when they purchased their first crash truck.

In January of 2019, HARS celebrated their 30th year. The Rescue Squad is an all-volunteer organization that is totally funded through donations and sponsorship. No one on the squad is paid.

The Rescue Squad volunteers work all week long during the Strawberry Festival. One of their main focuses are the parades where they utilize ATV mini ambulances equipped with medical equipment along the parade route. Each Saturday of Festival week, the Rescue Squad holds their biggest fundraiser of the year with the Car Show at Viking Park. The Car Show is open to everyone to register their “ride” and is free to the public.

The all-volunteer Humboldt Area Rescue Squad is made up of people who will get up in the middle of the night and make a difference in the event of an emergency, Privitt said. Anyone wanting to donate to HARS or just call to say ‘thanks’ can call their office at 784-4851. Privitt said if no one answers, leave a message.

Privitt has received several awards over the years, including a multiple-year winner of the Humboldt Chronicle’s Best of the Best contest in the ‘volunteer’ category. With every win, Privitt humbly acknowledges that it is an honor but always notes there are many others who are equally deserving.