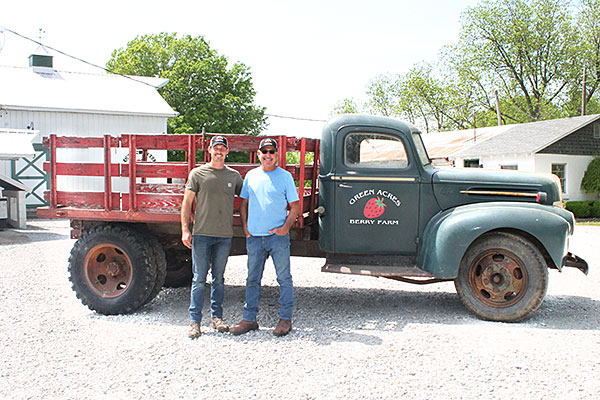 BERRIES BY THE TRUCKLOAD – Son Walker Parkins (left) and dad Denton Clay Parkins are all smiles as they prepare for the beginning of strawberry season at Green Acres Farm in Milan, Tenn. This antique truck is one of many fixtures of the family farm.

In a world that measures its weight in the value of strength, durability and convenience, strawberries exist as a reminder that a few of the greatest things in life come in the most delicate of packages. Strawberries are a way of life in Humboldt and the surrounding cities within Gibson County. With the West Tennessee Strawberry Festival underway, there is no better time to get back to the roots of the original reason behind the celebration and pay homage to those who work behind the scenes of growing the berry delicious fruit.

Green Acres Farms has been in business since 1941, when Denton Parkins’ grandfather started a dairy farm in small-town Milan, Tenn.  The familial farm stopped milk production in 1992 after the efforts to keep the dairy flowing became greater than the potential profits.

Parkins graduated with his degree in agricultural science from the University of Tennessee at Martin and eventually became the third generation owner of his family’s farm. With acreage and know how, in 1999, Parkins took on the task doled out by a West Tennessee extension agent and decided to plant Green Acres Farms’ first strawberry crops in a style of farming called plasticulture, which led to the first harvest being reaped for consumption in the spring of 2000.

Green Acres Farms has now been farming strawberries for 23 years and has become one of the largest, commercial strawberry growers in West Tennessee. Parkins depicted Green Acres’ approach to growing their strawberries. With plasticulture, plastic is laid down in late September over the 10 acres where they grow the strawberry plants. In the middle of October, workers use a machine that pokes a small hole through the plastic to drop the plants into the ground. After spending a portion of the beginning of their life semi-dormant due to the cold weather, the strawberries will begin to bloom and develop a flower in February or March.

Once the strawberry plants start to produce flowers, the berries will generally be ready to pick sometime around days 25 to 30. The strawberry season, due to the unpredictability of the Tennessee weather, usually lasts from the end of April until June. Parkins said if they get a full six weeks out of a season then they have been lucky because the plant goes back into a vegetation stage in temperatures above 80 degrees.

When the berries are ready for harvesting, the entire acreage is picked every single day. The workers, which Parkins described as loyal and hardworking, rotate the fields by doing a third of each acre day by day. Three days later, the first third of the acreage picked is then ready to have berries pulled from them again. Parkins described the strawberry season as a marathon with several moving parts the general public does not realize goes into creating the perfect berries ripe for eating. They are used to the convenience of picking up the fruit whenever they want rather than considering how it arrived in the store for them to purchase.

“Majority of kids a lot of times when you ask them where food comes from they say the grocery store,” Parkins described about being a farmer verses being a consumer. “They think it just comes on a truck. They just don’t know.”

Unlike supermarkets, Green Acres Farms produces a kind of berry known as the Chandler. Chandler strawberries are a species of strawberry that is considered to be a productive fresh market berry instead of a shipping berry. This means that they are more delicate and require more care when transporting, storing and freezing for later use. The sugar or brix content in a fresh market berry is much higher, meaning there is no reason to add sugar to the berries because they are already naturally extra sweet.

“[California] wants a berry that is very attractive, that smells good and it’s big. The juice–water content is lower in the shipping berry. It can be tossed around and bounced around and won’t bruise because it is just made for shipping. It is tough–like a basketball.” Parkins explained about the berries grocery store chains buy to sell. “The shipping berry will last for a week and hold up. Our berry is a fresh market berry and the water content is much higher and won’t last because it is full of juice. This is the real deal.”

When asked about the hardest thing about growing strawberries, Parkins vehemently stated that rain, heat and frost are the strawberries eternal nemeses. Rain will waterlog the entire strawberry crop if too many inches beat down on the delicate plants. Heat will sun scaled the fragile skins and frost will turn the bright yellow beginning buds of the berry plant fatally black.

“When 10-percent of the crop is starting to bloom, we have weather stations set up in our strawberry fields. When we know we are going to have a frost, I have the weather stations set up to have an alarm that will go off at 34 degrees.” Parkins noted about the irrigation system the farm has within the strawberry fields. “Sprinkler heads will spray water that is from a pump hooked up to tractors. We will put out 5,000 gallons of water per acre per hour when those alarms blare. When we put this water on the plant and that liquid converts to a solid, it takes energy. That energy is released in heat. That heat will keep that bloom from freezing all night.”

Parkins further confirmed that on nights when the temperatures fall below the freezing point, they will stay awake throughout the night to pump that water through the irrigation system to produce enough ice that will create energy to heat the plants. This, in turn, over the course of 10 or so hours, will cause the farm to use about a half million gallons of water to protect the strawberry crop for the season. Even with this system, if the wind is blowing too hard or the weather is below the teens the entire crop can still perish.

“Because it is so stressful, I always like to say that my favorite thing about strawberry season is the last day,” Parkins joked.

With the West Tennessee Strawberry Festival in full swing, Parkins was reminiscent on the reason for the formation of the historic festival. His grandfather, a first generation farmer, was integral to the early years of the long-held tradition.

“Gibson County in the 40s was the leading grower of strawberries for all of the United States. Some farmers would have up to 100 acres.” Parkins mentioned nostalgically. “Back then, everybody grew strawberries. When they had the strawberry festival it was a true celebration of the farmers and the growers and the community. It was a big deal.”

Parkins specified that the strawberry harvest is a larger hit among the older generation who loves to garner large amounts of strawberries for canning, preserving and baking. With the grandparents unable or unwilling to teach their children or grandchildren and their relatives unable or unwilling to learn, the art of the old ways are slowly dying, which will cause a ripple effect. Unless there is a return to gardening and a yearning for the knowledge of the traditions that have been passed down from family to family, then the need for strawberry acreage may decrease. He hopes this does not happen, but will adjust his market if this does unfortunately come to fruition.

Farming, whether that is for strawberries or pumpkins or any crops in-between, relies on generational work being passed down through the family for the continued success of the farm. There are some farmers that decide to start up and become modern, first generational farmers, but this is a rare occurrence in today’s day and age.  Green Acres has survived through this tradition of handing down the farm to immediate family members. Parkins’ grandfather gave the farm to his mother and father, then the farm was passed to Parkins, and now, it seems, the farm may pass hands again to Walker Parkins, who expressed his excitement for the opportunity the future presents.

“Every body wants your child to step into your occupation. I wasn’t sure he had the capability, but in the last five years, he was in the position where he really needed a job. So, I put him on his hands and knees, and made him work his way up. He has really stepped up and says he wants to carry on the tradition. I guess the people of West Tennessee can be excited that we have somebody else to take this [farm] on.”

With the 23rd year of the strawberry harvest and a fourth generation farmer on the horizons, it looks like on Green Acres Farms it will be strawberry fields forever–at least in Gibson County.