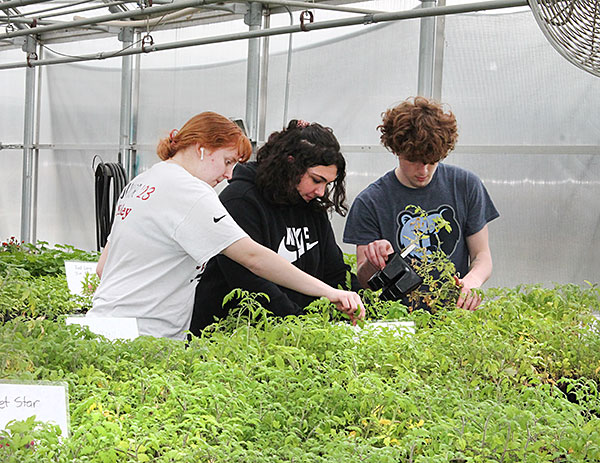 PICKING PLANTS – (from left) Hailey Cagle, Arianna Thornton and Rickey Reiney in the independent work based learning program at Humboldt Jr./Sr. High School led by Jason Wiles (not pictured) are picking plants for the customers of their FFA plant sale.

Spring has sprung over the last few weeks around Humboldt, which presented the perfect opportunity for the greenhouse on the Humboldt Jr./Sr. High School campus to roll out their FFA plant sale on Friday, April 15.

Jason Wiles, agricultural sciences teacher at the high school, is the director of the Future Farmers of America (FFA) club where the students he teaches are exposed to every facet of the world of agriculture. The FFA club runs multiple fundraisers led by the students throughout the year.

“The plant sale is the big project every year where I get the students involved, especially those that may not know anything about agriculture,” Wiles shared. “[We] teach them how to plant plants, how the roots grow, how the soil mediums are different, and how we fertilize.”

The students that work in the greenhouse are enrolled in one of his courses, namely introduction to plant science. Wiles stated most of the work around the greenhouse is completed by juniors and seniors in a work-based learning program during the last class of the day.

“I like that I get to be hands on,” Arianna Thomas, sophomore at Humboldt Jr./Sr. High School, exclaimed about working in the greenhouse around all the vegetation. “[My favorite are] probably Boston Ferns.” 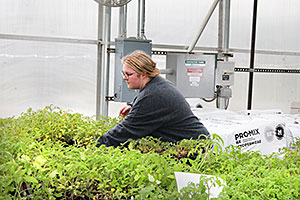 Greenhouse Growth – Mackenzie Dickson checks on the growth of a patch of vegetation in the greenhouse before people arrive to buy the last of the plants from the FFA plant sale.

Wiles and the students were very adamant that their plant sale is usually always a big hit with the community. Everyone around Humboldt comes to show their support and purchase the goods planted and cared for by the club.

“First thing everybody asks, ‘Where are the flowers?’” joked one of Wiles’ students. “The ferns were bought before we even started selling.”

Wiles further explained that the club could get a second greenhouse where they only sold ferns out of it and they would still sell out of the popular plant.

The funds raised by the plant sale are funneled right back into the greenhouse to provide more opportunity for the students to get their hands dirty, and learn more about horticulture and other agricultural pursuits. Any extra funds acquired are then routed back through the FFA club program.

Wiles said the event has been a big success garnering, about $3,500 already within the first week of it being open to the public. With this progress, the fundraiser will likely come to an end earlier than the average two-week selling period–just in time for the Strawberry Festival. Last Thursday, Wiles mentioned he would ideally like to have everything sold by Saturday, April 23 after doing two sales, half priced and 75-percent off.

The FFA program is already looking forward to its next ventures once the summer comes to a close and school is back in session. The members of the organization will be directly engaged in raising chickens and selling eggs to the community. The project will involve all of the agricultural science classes, even the agriculture mechanics class, which will use their time to build the shed that will house the chickens. The club also plans to use their hydroponics system to grow lettuce and tomatoes in the coming school year on top of their usual fall mums sale.

“[The greenhouse] is a base for our program, that’s what I enjoy about it. It is a good program and a good way to get the students involved.” Wiles voiced. “A lot of kids may never do anything in agriculture but they love being in the greenhouse.”