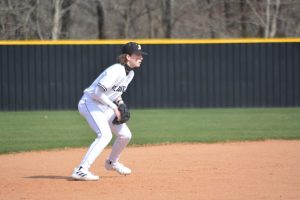 Peabody’s Owen Lee prepares to field a ground ball against Middleton during a high school baseball game on March 28, 2022.

Spring Break has come to an end, so spring sports action will pick up across Gibson County this week.

Bradford (4-10, 2-0) at Dresden (4-3, 2-0 13-1A) Baseball (4:30 p.m., Monday): This was also changed to a doubleheader at Dresden on Monday due to weather. The winner of this series will hold sole possession of first place in District 13-1A as Bradford has swept South Fulton and Dresden swept Greenfield. Bradford went 0-4 in Gulf Shores (Ala.) last week.

Lake County (1-7, 0-0 14-1A) at Peabody (5-6, 2-0) Baseball (5:45 p.m., Monday): This is the third baseball series to be moved to a doubleheader on Monday because of the weather, but this one moved to the Tuesday location, which was Peabody. Peabody has a District 14-1A series under its belt when it swept Middleton last week. A sweep here would put the Golden Tide in a great position to take first place in the district with series against Humboldt and Halls remaining.

Huntingdon (0-3) at Milan (1-1) Soccer (6:30 p.m., Tuesday): After playing an opening District 12-A match at Middleton on Monday, the Bulldogs would love to pick up a home district win over the first-year program. Milan has six matches on the schedule this week after not playing a game in Week 1 (basketball team at state) or Week 3 (Spring Break).

South Gibson (2-1) at Dyersburg (4-0) Soccer (6 p.m., Thursday): These two teams represented West Tennessee in the Class AA state tournament last year, and these two are favored to make another run. Both teams have plenty of power back on offense, so the key will be which defense can make stops.

Peabody (5-6) at Bradford (4-10) Baseball (6:30 p.m., Thursday): After both teams play a tough district series on Monday, this is a rivalry game. Both teams will be looking to win and correct any early season mistakes as the second half of the spring season begins on Thursday. And with the No. 1 and No. 2 pitchers going on Monday, this will be a good chance to work on pitching depth.