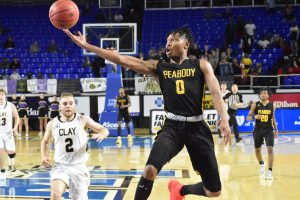 Peabody’s DeMarkus Kee (0) goes up for a layup against Clay County in the Class 1A semifinals at the Murphy Center on March 18, 2022.

When most talk about Peabody senior DeMarkus Kee, the conversation is on his ability to score and handle the ball.

But what Kee did on the defensive side of the ball was better than any points he has ever scored.

Kee was put on Class 1A Mr. Basketball winner Grant Strong from Clay County, and he held him to 19 points on 6-of-21 shooting, including a 0-for-8 mark from 3-point range.

The defensive effort from the entire team allowed Peabody to beat Clay County 51-43 in the Class 1A semifinals to earn a spot in the state championship game for the first time since 2005.

“This is what we have been looking forward to since the first practice,” Peabody coach Wes Miller said. “This is what they wanted. They wanted a piece of Clay County, and my kids guarded tonight. They sat down and guarded all night.”

Strong was averaging 33.8 points and 9.7 rebounds entering the state tournament.

“This isn’t against Grant Strong because he is a great player, but we played (West Carroll’s) Jalen Anglin twice and Jalen Anglin is as good as anybody off the dribble,” Miller said. “When this group decides to do something, they get it done. They wanted to guard, and they wanted to show they deserved to be right where they are.”

But the Peabody defense didn’t give up more than 12 points in a quarter, and it held Clay County to 0-of-17 shooting from 3-point range.

The Golden Tide didn’t shoot much better from 3-point range, but they did hit 1-of-15 from 3. And Jason Hunt’s 3-pointer helped Peabody take a seven-point lead in the fourth quarter.

DeMarkus Kee did have a solid offensive night on top of guarding Strong as he scored 11 points to go with seven rebounds. Junior Derek Kee recorded his second double-double of the state tournament with 18 points and 10 rebounds.