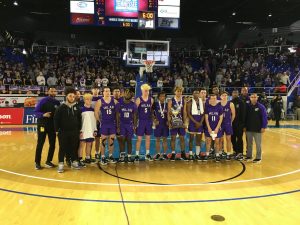 The Milan boys basketball team finished as state runner-up in the Class 2A state tournament with a 72-55 loss to East Nashville.

Playing in the final game of the season is the goal of any team, and for the first time since 1942, the Milan boys basketball team got that opportunity.

On the final Saturday of the season, the Bulldogs had the opportunity to bring home a gold ball. But early turnovers and nerves put Milan behind.

The Bulldogs fought to stay with East Nashville, but in the end, Milan fell 72-55 in the Class 2A state championship.

“We did a lot of things that were uncharacteristic of us,” Milan coach Jason James said. “We were a little bit jittery, and they came out and pressured us. We didn’t respond early, and it was like a waterfall that just kept going and going and going.”

Milan ends the season with a 25-8 record, and Saturday’s loss ended an 18-game winning streak.

Maybe the spotlight was too big early as Milan committed uncharacteristic turnovers and missed shots that the team usually hit. The result was 12 points off turnovers in the first quarter for East Nashville and a 20-7 advantage.

But this Milan team has shown grit all season, and this team didn’t give up. The Bulldogs fought back and played with East Nashville for the following three quarters.

But East Nashville never let Milan make a run to try and take the lead.

“We were able to settle in and get some stops, but our guys kept playing and kept playing,” James said. “We settled in and did some good things, but it wasn’t enough.”

Robinson and Tharpe were named to the all-tournament team.

“It will be a little bit for me,” James said about when he will be able to reflect on the performance this season. “When you sit down and think about how far they have come, you have to be proud. For me, it is an everyday reflection of where they are now from where they were. I am proud. You get into coaching for many different reasons, but one of those reasons is to impact lives. But these guys gave us so much more.”