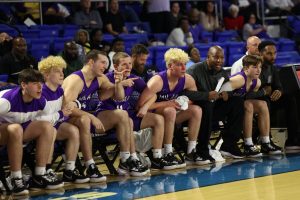 Milan’s players sit on the bench cheering for their teammates as the Bulldogs beat York Institute in the Class 2A boys basketball quarterfinals on March 16, 2022.

One thing that the Milan boys basketball team has worked to excel at all season has been defense.

On Thursday, the Bulldogs had one of their best defensive performances of the season.

Milan held Tyner to 16 points through 23 minutes and 50 seconds to advance to the Class 2A championship game with a 59-41 victory in the state semifinals.

“It was huge,” Milan coach Jason James said. “When you have talented players like they have, to be able to hold them to that little was big. I thought we were able to force them out of spots on the floor that they wanted to get to. We held them to one shot.”

Milan (25-7) advances to play East Nashville in the championship game at 11 a.m. on Saturday. This is the Bulldogs’ first trip to the title game since 1942.

The Bulldogs’ defense took four key charges and kept the pressure on Tyner throughout the first three quarters.

Milan held a 25-16 lead at halftime as it held the Rams to five points in the second quarter.

The Bulldogs opened the second half on a 15-0 run to take a 40-16 lead, and Tyner didn’t score until there were nine seconds remaining in the third quarter.

Sophomore Carson Pruitt scored 10 points on 4-of-5 shooting with baskets that came in key points of the game.

“I have been doing this 22 years, and these dudes have as much fun playing as anybody,” James said. “It has been an absolute joy to come to work everyday because they love it.”