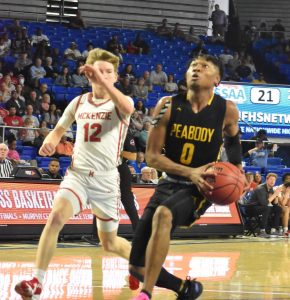 Peabody’s DeMarkus Kee (0) goes up for a layup against McKenzie in a Class 1A boys basketball quarterfinal on March 17, 2022.

Behind a strong defensive effort, the Peabody boys basketball team advanced to the Class 1A semifinals for the first time since playing for the title in 2005.

The Golden Tide held McKenzie to 26.9 percent shooting for the field to knock off the Rebels 63-48 in the Class 1A quarterfinals.

“We have been preaching being patient and trust the process, and tonight we started to do that,” Peabody coach Wes Miller said. “Last night in the team meeting, I told them one thing they couldn’t do was come out here and go up and down the floor the first three minutes because you are going to have to find your second, third and even fourth wind. Run when you have your opportunities, but then do what we do best.”

Peabody (24-9) advances to play Clay County at 5:45 p.m. on Friday in the semifinals. Clay County is the defending state champions.

After two games away from the team, senior Jason Hunt was back for the Golden Tide — coming off the bench as the No. 6 man. Hunt finished with 16 points, six rebounds, two assists and two steals in 22 minutes of action.

“This meant everything,” Hunt said. “I just wanted the opportunity to be back out there with my guys.”

The Kee brothers were the leaders on the court as senior DeMarkus Kee was the leading scorer with 21 points to go with three rebounds, two blocks and two steals. Junior Derek Kee filled the stat sheet with 14 points, 13 rebounds, four assists, five steals and three blocks.

“It felt great to play on such a big stage,” Derek Kee said. “I have played in the state championship for football, but never with as many eyes on me. In football, I wasn’t that guy, just a guy who made plays on defense. Here I can show out and make plays to help my team.”

Peabody was efficient from the floor, shooting 50.9 percent on 27-of-53 shooting.

McKenzie was led by Marquez Taylor with 18 points.