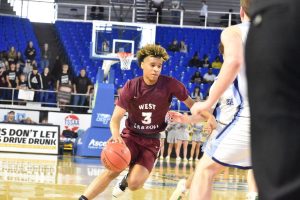 West Carroll’s Jalen Anglin (3) dribbles the ball against Hampton in the Class 1A quarterfinals at the Murphy Center on March 1, 2022.

West Carroll senior Jalen Anglin has been a special player for the past couple of seasons. He has been a leader and a constant scoring threat.

In Thursday’s Class 1A quarterfinal, he showed how well he could play on the biggest stage. He scored 30 points on 12-of-20 shooting from the field.

But turnovers and rebounding cost the War Eagles, who lost to Hampton 60-56 in the Class 1A quarterfinals. This is the second straight season that West Carroll has lost in the quarterfinals.

“Jalen is going to get his,” West Carroll coach Ryan Mansfield said. “He can create space. Jalen has taught me so much as a coach.”

The offense was flowing in the first quarter as Anglin started off with 13 points in the eight minutes as West Carroll took a 20-15 lead.

But everything seemed to unravel in the second quarter. Hampton outscored West Carroll 21-3. Hampton dominated the boards and took a 24-10 advantage into halftime.

“We just had a bad shooting quarter,” Mansfield said. “I am not blaming the refs, but there was some contact in the bottom, and it altered things.”

West Carroll didn’t quit. A 3-pointer by Xander Moon with 3:19 left in the third quarter cut Hampton’s lead to three points (40-37). And 20 seconds later a layup by Andrew Huff cut the lead to one.

“My guys don’t lay down,” Mansfield said. “They never have. Every game we have lost has been by single digits.

The War Eagles tied the game twice in the final 9:20 of the game, but they could never take the lead.

” I felt good getting to the rim,” Anglin said. I didn’t take too many shots.”

“We had to change our energy in the second half,” Clark said. “This was tough, but we have to move forward.”

West Carroll graduates four of the five starters from this season. JaQuan Adkins will the only returning starter next season.