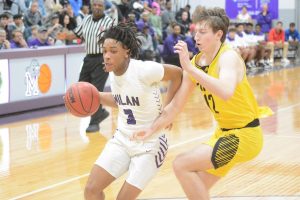 Milan’s Jodarius Robinson (3) drives to the basket against Fairview in a Class 2A quarterfinal on March 7, 2022.

Playing on the biggest stage didn’t seem to affect Milan senior Jodarius Robinson. Robinson had the best offensive game of his high school career in the Class 2A quarterfinals.

Robinson scored a game-high 38 points on 13-of-23 shooting from the field as the Bulldogs beat York Institute 62-55 in double overtime on Tuesday.

“We talk a lot about toughness and doing what you are asked to do, regardless of the situation,” Milan coach Jason James said. “There were a lot of things going on in that game, but these guys were able to continue to execute, continue to play hard and continue to get stops.”

Robinson has been Milan’s leading scorer all season, entering the state tournament averaging 13.4 points per game. But on the biggest stage, shots don’t always fall.

“Whatever (Coach James) told me to do, I did it,” Robinson said. “I just acted like this was our home court.”

It was Robinson’s shot with seven seconds remaining in regulation that sent the game to overtime tied 48-48.

Robinson was 4-for-8 from 3-point range and 8-of-11 from the free throw line to go along with six rebounds, three assists and two steals.

Milan built a 24-18 lead at halftime with strong defense in holding York Institute to 28.6 percent shooting from the field.

“In the first half, I thought we did a good job keeping them in front of us,” James said. “(Jonathan Heddings) got roaming a little bit. We were on his hip, and he was able to get to his spot. In the fourth quarter, I think we did a better job backing up and keeping our feet squared to them.”

But a 3-pointer by Robinson with 3:47 remaining in regulation put the Bulldogs back in the game.

Behind Robinson’s 38 points was Adam Arnold with six points, while Kam Tharpe and Carson Pruitt added five points each.

“This means a lot to us,” Milan junior Easton Yates said. “We have spent a lot of time in the gym. I felt like we had great practices this week, and we came in here prepared.”