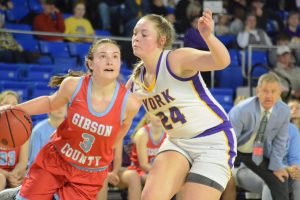 “We didn’t play to our abilities in the fourth quarter,” Gibson County coach Mitch Wilkins said. “It just wasn’t meant to be. We didn’t play our best game for 32 minutes like we needed to. A lot of breaks went their way down the stretch hen they needed them to.”

The duo of Madison and Micah Hart helped Gibson County take a nine-point lead with one minute remaining in the third quarter.

Gibson County scored one field goal in the fourth quarter as the Lady Dragons continually got the free throw line to take the lead. Gibson County ends the season at 30-6.

Micah Hart finished with 21 points, while Madison Hart, a Class 2A Miss Basketball finalist, recorded a double-double with 17 points and 12 rebounds.

Westview 55, Riverside 29: For the fifth straight season, the Lady Chargers (30-2) will play in the state semifinals.

Westview had little trouble putting away Riverside (19-13) with an offensive assault that included lots of 3-pointers.

The Lady Panthers kept it close through the first quarter, but a 16-point second quarter helped Westview build a 29-18 halftime lead.

“I don’t think that we played to our potential,” Westview coach Brian Haskins said. “We will have to be better on Thursday.”

The Lady Chargers hit nine 3-pointers, even though it was on 9-of-32 shooting. Riverside was held to 27.9 percent shooting from the field in the loss.

“They had so many weapons, so if you sagged in, they would hit shots,” Riverside coach Nicole Courtney said. “If you guard, they would find another person. Having five offensive threats on the floor is tough for any defensive team.”

Gatlinburg-Pittman 68, Scotts Hill 32: The Lady Lions (22-8) had a tough go in their first state tournament appearance since 2011.

Gatlinburg-Pittman outscored Scotts Hill 23-6 in the first quarter, and the Lady Lions just couldn’t get back in the game.

The Lady Highlanders shot 56 percent in the first half on the way to scoring 40 points and leading by 27 points at halftime (49-13).

“We watches a lot of video on them, and we knew they had a really good post player,” Scotts Hill coach Tracy Chandler said. “Everything goes through her. We knew we was going to have to neutralize her and hope they didn’t hit shots, but they did.

In 39 years of coaching, I am more proud of this team than any team I have coached. We brought one girl back from last year that averaged five points per game. When we started into camps, we weren’t very good. Nobody expected anything out of us.”

Scotts Hill shot better in the second half, but the mercy rule still went into effect in the fourth quarter.

Page 52, Dyer County 38: After a bad first quarter, the Lady Choctaws (24-8) kept trying to fight back into the game, but in the end, Dyer County’s season came to an end in the state quarterfinals.

The Lady Choctaws held Page to six points in the second quarter and eight points in the third quarter, but they couldn’t get much closer than that 12-point difference.

“Every time we would cut it to eight or 10, they would come down and hit a tough shot,” Dyer County coach Derek McCord said. “We came in with the game plan of mixing up our zones, and I still feel good about the game plan, as they went 1-of-16 from 3. But you can’t prepare for the leaners, the drives, the twisting and turning shots.

“We turned the ball over, and that is uncharacteristic for us. We couldn’t get over that hump.”

Dyer County was led by Caitlyn Berry with 13 points, while Reagan Thompson recorded a double-double with 12 points and 11 rebounds.

South Side 62, Greeneville 54: For the first time in program history, the Lady Hawks (23-2) are headed to the state semifinals. South Side was 0-5 in the state tournament entering Tuesday’s game.

South Side will play Page in the semifinals on Friday at 10 a.m.

The Lady Hawks played well early and led 19-9 after the first quarter, but Greeneville started figuring out how to break the defense.

The Lady Greene Devils fought their back in the game and trailed 48-47 with 6:10 remaining. South Side coach Brent McNeal called a timeout, and what followed was a 14-7 run to end the game.

It wasn’t a perfect game for South Side with 21 turnovers and went 12-of-25 from the free throw line (48 percent). Albany Collins led the scoring with 21 points, while Ti’mia Lawson and Jaidynn Askins recorded double-doubles. Lawson had 13 points and 11 rebounds, while Askins had 15 points and 10 rebounds.

Creek Wood 43, Fayette-Ware 40: A strong second-half run came up just short for the Lady Wildcats (23-7) as they fell in the quarterfinals.

Creek Wood (30-4) took a 25-16 lead at halftime, but Fayette-Ware used patience to slow fight back into the game. The Lady Wildcats cut the lead to one point multiple times in the final minutes, but they couldn’t get the lead.

Chrishunti Walker and Mauryah Jones led Fayette-Ware with 10 points each, and Walker recorded a double-double with 11 rebounds.