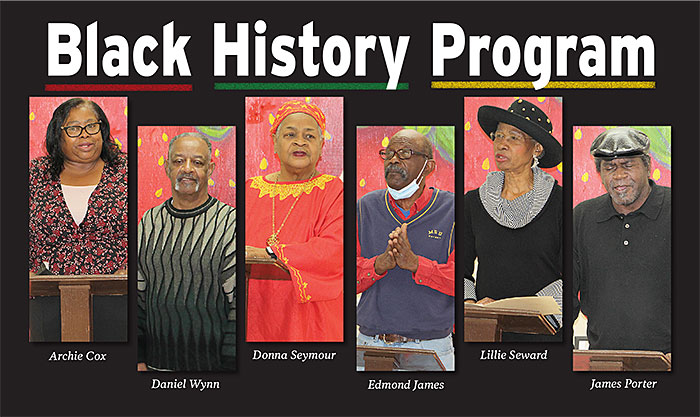 The Humboldt Senior Citizens Center hosted a Black History program last Thursday morning. Even though the weather did not cooperate, a good crowd attended the program.

Humboldt Mayor Marvin Sikes was supposed to be among the speakers during the program but city business took him away and he was unable to attend. Mayor Sikes said he would come back this week and present his part of the program on Monday. Those who know Sikes know he is a historian and has a vast knowledge of Humboldt history, and was eager to share with the community.

Without the main speaker of the day, Senior Center Director Archie Cox went on with the program. And what a program it was. Rev. Daniel Wynn filled in for Mayor Sikes. Those attending heard about Humboldt’s Black History, the country’s Black History and Rev. Wynn took them to church. He combined the word of the Bible with Black History for a very moving program.

Cox asked Rev. Wynn to open the program with prayer.

Next, Edmond James read Bible scripture from the book of James. During the reading, James paraphrased the scripture saying you have to be in the present to look into the future but you must remember what is in the past.

“Thou shall love thy neighbor as thyself,” James read the scripture.

James spoke about God’s love, “God loves us. We have to love God. We have to understand that love. If we live like this, we would live as brothers and sisters.”

After the readings, Cox took the podium once again and led the group in singing the Black National Anthem, “Lift Every Voice and Sing”. Attendees were in the spirit as they sang.

Cox then asked Rev. Wynn if he would speak in place of Mayor Sikes’ slot of the program, which he graciously accepted the offer.

Wynn offered some song lyrics from James Brown and how people must cleanse their souls.

He said, “If you don’t have an education, you might as well be dead. I’m black and I’m proud.”

Wynn named off several prominent African Americans including Booker T. Washington, a great black educator. He wanted people to be equal.
George Washington Carver was a great scientist, Rev. Wynn said, who took a peanut and made hundreds of products out of it.

Rosa Parks got on a bus in Montgomery, Ala. after a long hard day’s work and sat in the front seat. Rev. Wynn said that took courage.

Rev. Wynn highlighted Dr. Martin Luther King Jr.’s famous “I Have a Dream” speech as he stood in Washington D.C. talking to the massive crowd.

Wynn recited some of the most notable exerts from Dr. King’s speech, “We are all God’s children, black men and white men, Jews and Gentiles, Protestants and Catholics. Free at last, free at last. Thank God almighty we are free at last.”

“Their contributions should make every black person say, ‘I’m black and I’m proud’.”

Rev. Wynn then went back to the Bible and talked about the story of Simon and how he helped bear Jesus’ cross.

“I’m glad someone helped my Lord bear his cross,” Wynn continued. “They hung him up and he said, ‘Forgive them Father for they know not what they do’. He gave us the right to eternal life.”

Every person attending the program felt the Holy Spirit after Rev. Wynn closed his Black History speech, which ended in a sermon. It was very fitting to see both the good parts and the bad parts of American’s history, especially Black History.

The program ended with James Porter singing a Lou Rawls song, “Tobacco Road”. It too was a heart felt performance that touched the hearts and souls of those attending.

Rounds of applause offered kudos to Director Cox for hosting a wonderful Black History program and for all who participated.