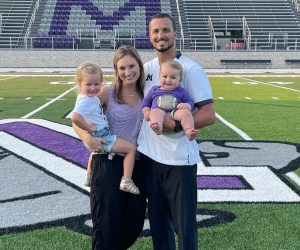 Milan’s Derek Carr has been named the new head football coach at Milan.

Milan Special School District Director of Schools Jonathan Criswell announced on Thursday that Derek Carr has been promoted to head football coach of the Bulldogs.

“We are excited to announce Derek Carr as the next Head Football Coach at Milan High School,” Criswell said in a press release. “Derek brings a professional, visionary approach to guide the Bulldogs for the foreseeable future. He comes with a high reputation across the state of Tennessee for his ability to teach the fundamentals of the game of football after helping lead offenses at both the high school and the Division I college level.  He has established himself as a capable leader in the last two years here in Milan and has become a vital part of our school and the entire community.  We look forward to Coach Carr’s Bulldogs taking the field at Johnnie Hale Stadium on August 18th and hope that the Milan community will help make his family feel welcomed in the very near future.”

Carr replaces Carl Diffee, who was the Bulldogs’ coach for the past two seasons.

Carr was the offensive coordinator under Diffee, and he also serves as the school’s softball coach.

Carr played high school football at McKenzie before signing with UT Martin as a quarterback.

His time at quarterback at UT Martin ranks him in the Ohio Valley Conference’s top-10 in pass completions (665, fifth), passing touchdowns (69, fifth), passing yards (8,428, seventh) and total offense (8,484, eighth) in his career.

During his senior year, Carr set an NCAA record for passing efficiency (42-of-46) along with school records of 560 yards and seven touchdowns at OVC rival Murray State. He was named to the all-OVC second team that season.

Milan is coming off a 4-6 season in 2021 when the Bulldogs fell in the first round of the Class 4A playoffs. Milan reached the Class 3A state championship game in 2020.