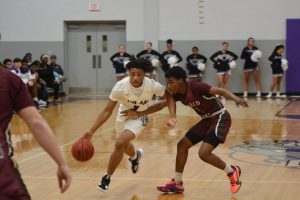 The Christmas holiday is less than two weeks away, but girls basketball fans in Gibson County will have a treat this week. Undefeated Gibson County will play two undefeated teams this week with McKenzie and South Gibson coming to Bo Booth Gymnasium for two games that fans will want to see.
Michael Odom is now 12-7 (.632 percent) this season with his picks. He went 2-2 last week.
Check out the top games in Week 5:

McKenzie (7-0) at Gibson County (9-0) Girls (6 p.m., Tuesday): Son takes on his father in this one as John Wilkins will play Mitch Wilkins for the second straight season. McKenzie won the meeting last year, so dad will be looking to avenge that loss. Both teams enter this game unbeaten as McKenzie is averaging 62 points per game and Gibson County is averaging 69 points per game.
Odom’s Pick: Gibson County
Milan (2-1) at Crockett County (4-3) Boys (7:15 p.m., Tuesday): The Bulldogs fell in their season opener to Crockett County (55-49), so they will be looking for revenge this week. Milan has beaten Bradford and Sacred Heart since losing the opener, and the team is playing more together. So the goal will be to avenge that opening loss.
Odom’s Pick: Milan

West Carroll (3-0) at Union City (5-3) Boys (7:15 p.m., Thursday): The War Eagles need some tough games, and this one will be a great test. West Carroll has three games canceled last week, so the team will have had 11 days off before playing Scotts Hill on Tuesday. West Carroll will look to the guard-post combo of Jalen Anglin and Josh Clark to lead the way in this one.
Odom’s Pick: West Carroll
South Gibson (9-0) at Gibson County (9-0) Girls (6 p.m., Friday): If one game against an undefeated team wasn’t enough for Gibson County, the Lady Pioneers are playing a second undefeated team this week. The Lady Hornets are giving up an average of 31.9 points per game, but can that defense do the same against a team like Gibson County?
Odom’s Pick: Gibson County
Peabody (5-2) vs. Bolivar (4-3) Boys at Lexington (4 p.m., Saturday): This game will be played at Lexington as part of the FCA Invitational. Expect a high scoring affair as both teams have a high-powered offense. Bolivar will have had 14 days off before playing Fayette-Ware on Friday. The Tigers have scored 80 points three times this season. Peabody will try to match that offensive output with the play of Jason Hunt, DeMarkus Kee and Derek Kee.
Odom’s Pick: Bolivar