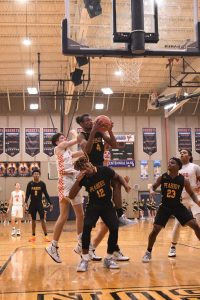 Peabody’s Derek Kee (4) goes up for a layup against South Gibson during a high school boys basketball game on Nov. 30, 2021.

Two losses in the early part of the week put Michael Odom behind the eight-ball in having a good week picking games. He did go 2-1 on Friday for an improvement.
But the damage was done to his record. Week 4 will hopefully bring better results as the countdown to Christmas continues.
Michael Odom is now 10-5 (.667 percent) this season with his picks. He went 2-3 last week.
Check out the top games in Week 4:

South Fulton (2-2) at Peabody (0-4) Girls (6 p.m., Tuesday): After the Lady Tide’s last-second loss to Greenfield, this team has shown it has the potential to play with quality teams. This is a good chance for Peabody to pick up its first win of the season. South Fulton’s two wins are over Halls and Jackson Christian.
Odom’s Pick: Peabody
Milan (0-1) at Bradford (2-3) Boys (7:15 p.m., Tuesday): This will be Game 2 for the Bulldogs after dropping a six-point game to Crockett County. Bradford has a young team that has continually gotten better through a tough early schedule.
Odom’s Pick: Bradford
South Gibson (4-3) at Peabody (3-2) Boys (7:15 pm., Thursday): The Golden Tide won the first meeting 78-69 last week. Peabody now has all of its football players back, so there are scoring threats all over the court. South Gibson is going to have to play better defense than last week to even this season series.
Odom’s Pick: Peabody
Sacred Heart (4-1) at Milan (0-1) Girls (6 p.m., Friday): If the Lady Bulldogs could pull off a win here, it would be a big momentum boost in the early part of the season. Sacred Heart does have four wins, but those wins are over Madison twice, Halls and Humboldt. Milan will have to play consistently for four quarters to have a chance to win.
Odom’s Pick: Sacred Heart
Peabody (3-2) at West Carroll (3-0) Boys (7:15 p.m., Friday): The talent on the court on this one is numerous. Peabody has Jason Hunt along with brothers DeMarkus Kee and Derek Kee, and all three of them can score 20 points per game — or 30, 40 points if needed. West Carroll has Jalen Anglin and Josh Clark along with the athleticism of Xander Moon.
Odom’s Pick: Peabody