The Humboldt Jr./Sr. High School band program just got a boost after school board members took action last Thursday evening. The October 7 meeting may have been small but three important agenda items were addressed, including restarting the Band Booster Club. Board member Terry Johnson was unable to attend the school board meeting.

“I do not take lightly this opportunity to help contribute to the future of our community,” Smith penned in his letter. “I am writing this communication to request permission to restart the band booster club. It is imperative to allow the parents and students to form this connection. This support will be shown in many ways included but not limited to volunteering time, raising money and contributing funds to better enhance the total band experience. The success that this music program has had throughout the years dating back to the 1970s is remarkable. We look forward to growing and expanding upon those same successes and work ethic.” 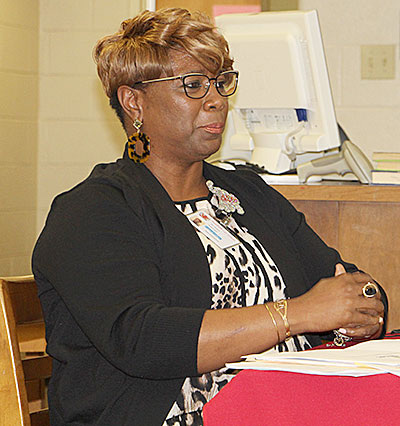 Director of Schools, Dr. Janice Epperson said the Band Booster Club dissolved years ago but was not sure why. She said Smith has been doing his own fundraising.

On a related subject, board member Leon McNeal asked Dr. Epperson how the band trip to California Tournament of Roses Parade was coming along.

Dr. Epperson said it is on track and that Smith had to review all the information and get the final student list together. The Mass Band trip is moving forward.

Board member Mark Hodge had questions about the Band Booster Club. He asked if the school system has oversight of the club. Dr. Epperson said they do not. The booster club is separate, and will do their own fundraising and spend the money how they want. The school will receive audit reports from the Band Booster Club, she noted.

“Absolutely!” she quickly replied. “The band program is growing and going strong.”

The board unanimously approved restarting the Band Booster Club.

Another topic of concern on the school board agenda was amending the 2020-21 Humboldt City Schools’ budget. Amendments were necessary in special education areas of the budget.

Special Education Supervisor Beverly Cannon addressed the board regarding the budget amendment requests. Cannon said the budget was prepared and passed before but later, discrepancies in some salaries were discovered. The discrepancies totaled over $100,000 more than where they should have been.

McNeal wanted to know why the board was just now getting the report.

Dr. Epperson said she and her staff looked at the budget very closely, and the changes should have been made in August. But the financial reports were not in at that time. Once those reports were completed, they discovered the overage.

Board chairperson Valeria Wedley said everyone wants the budget done correctly and when issues are found, address them to make sure the budget is kept in order.

The board voted to amend the 2020-21 Humboldt City School budget.

A third agenda item dealt with another sticky situation, causing the board to backtrack on an earlier decision. The board was asked to rescind tenure that was granted for five teachers in May 2021. Teachers having their tenure rescinded were David Robbins, Anthony Ballard, Mindy Bufford, Tony Kendall and Delaney Naffzigger.

Dr. Epperson explained the process of receiving tenure, according to state guidelines. She said on May 13, 2021 a list of teachers was submitted to receive tenure. In the process of auditing, it was discovered the teachers were wrongfully awarded tenure that did not qualify. Dr. Epperson said teachers have to score a 4 or 5 for level of effectiveness for five years. She noted scores are not rounded up. Her example was a 3.5 is a 3.5, and is not rounded up to a 4.

McNeal asked if the board received misinformation when they voted to grant tenure. Dr. Epperson said the board was given information in error.

Lillian Shelton, who served as interim superintendent last school year, attended Thursday’s board meeting. She suggested the state guidelines should be in the school board policy so everyone can understand it.

Wedley posed the question and asked if there is something the teachers can do to bring up their scores. She noted tenure is a good thing and she wants as many teachers tenured as possible. Wedley suggested there should be a step-by-step system.

Dr. Epperson said there is a checklist and that list is checked by more than one person for accuracy.

The final segment of each school board meeting is the superintendent’s report. This segment is always informational and Thursday’s meeting was not different except one portion was fun.

Taylor and other school staff had the board members and those in the audience engage in a live exercise using the app. Questions were posed through the Kahoot app, then four multiple choice answers are presented. Not only are students graded on getting the answer correct, but also on the time needed to answer the question.

The crowd exercise consisted of a few questions and the participants used cellphones to take the quiz. After each question, the scores popped up on the app, which was also on the big screen in the school board meeting. Everyone enjoyed the contest session, which got competitive once the scores were posted on the screen.

At the end of the test, the third place scorer was recognized on the screen, then second place and for the winner, a spotlight came on screen for a couple of seconds before the winner’s name came up.

This was a fun exercise for those who participated and those who simply watched the exercise take place.

Also during the superintendent’s report, Dr. Epperson announced there will be a homecoming parade on Main Street on Friday, October 22 at 2 p.m. That evening, the Vikings take on the Riverside Panthers to conclude homecoming festivities.