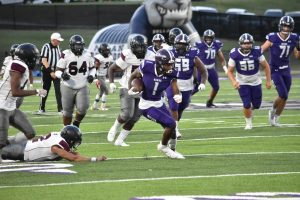 Milan’s Anthony Brown runs the ball up the field against Liberty during Week 4 action on Sept. 10, 2021.

On Tuesday afternoon in the school cafeteria, Milan senior Anthony Brown made his college decision in front of teammates and classmates.

Brown, who is listed at 6-foot, 180-pounds, chose Arkansas over Illinois, Indiana, Tennessee and Wisconsin.

So far this season, Brown has 161 yards receiving and one touchdown to go with 18 total tackles with one tackle for loss.

This past weekend, Brown went to Arkansas with Haywood defensive back Jaylen Lewis, who the Bulldogs play on Friday night. Lewis is an Arkansas commitment.

As a junior, Brown helped the Bulldogs reach the Class 3A state championship. He threw for 242 yards and six touchdowns, rushed for 962 yards and 14 touchdowns and had 308 yards receiving with five touchdowns. Defensively, he had 64 tackles with eight tackles for loss and nine pass breakups.

Brown will be teammates with Lewis next season, and Lewis is ranked as the No. 18 prospect in the state and No. 54 cornerback recruit in the country.

Brown is the 18th hard commitment for the Razorbacks, which include four four-star recruits and 13 three-star recruits.