August 19, 2021 was a date that will be remembered for a long time in the Humboldt community. Keenan Luckey, a member of the Humboldt High School class of 1993 passed away from COVID.

Ted Martin, the quarterback for the Vikings from the 1991-1992 football seasons, gave a touching tribute on the Viking News on Demand football broadcast August 20. This birthed something even bigger, a night of honor on September 4, during the home game and decals that would be worn for every game following this season. 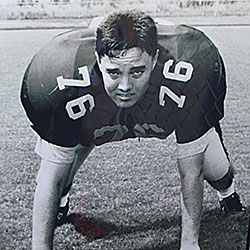 “Keenan was a valued member of the Humboldt High School football team including being a starting offensive lineman on the 1992 State Semi-final team. Besides being a tremendous football

There’s a good chance many of you reading this article have attended one of Keenan’s crawfish or shrimp boils in the area which he loved to do raising money for numerous organizations. Martin said, “Keenan was a generous, humble man and would do anything for his family and friends.” And from the amount of people who would stand at the end of the field, it was obvious the impact that he had made as well as the legacy that continues to live on.

To honor that legacy, each player this season will wear a decal with Keenan’s initials on their helmet. Martin before the game, on September 4, addressed the team and explained to them what the decals meant and what Luckey meant to the Humboldt Viking football team 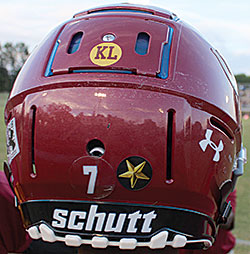 When asked how shocked Ken (Keenan’s father) was when he heard that the Humboldt Jr./Sr. High School wanted to honor Keenan’s life he said, “I was somewhat surprised that the school wanted to honor Keenan in such a way. The team that Keenan played with was a close group of guys that was coached by Jack Cain. They never really had a really successful year until they were seniors, Coach Cain’s first year returning to Humboldt in 1993. They advanced to the AA semi-finals and lost to Brentwood in a close game.”

“If the current athletes at Humboldt could take anything from this (the honoring of Keenan’s life and legacy at Humboldt City Schools) it would be that this team was an average team before their senior season,” Luckey said of his son’s team. “But with good coaching and good team leadership, they accomplished more than they thought. That year they realized early in the season with Coach Cain’s help what they could do.”

Some of Luckey’s favorite memories were when they upset Milan in 1993 after losing to the Bulldogs 10 years in a row. He also recalled how they went to Springfield in the state quarterfinals and upset them on a cold snowy night.

“It was as much fun for the parents and fans as it was the team,” Luckey recalled. “Barker Memorial Stadium would be full to capacity for the home games.”

One thing is certain, Keenan Luckey loved everyone and had pride in the city of Humboldt. While he will be greatly missed, his legacy will live on through his wife and son, and others who were teammates and community members impacted by his life.