Wilkerson is and has been the voice of the Vikings on radio broadcasts and live streaming sites for the past few years. Now, he will put his words in print as he covers the Vikings, Lady Vikings, Jr. Vikings and Jr. Lady Vikings for the Humboldt Chronicle.

“When we found out Dalton and Rhonda Vann were leaving and moving back to Missouri, we were scrambling to find someone to cover sports,” said Chronicle Editor Danny Wade. “Seth immediately came to mind. He’s very good at covering sports on the radio and streaming live. He has a wonderful relationship with the schools and coaches. He’s a go-getter. It seemed like he would be a perfect fit.”

When Wilkerson was asked if he was interested in becoming the newspaper’s sports person, he wanted to accept the position but could not commit. He needed to talk it over with his wife, Kelsey, before making a decision. A day later, he humbly turned down the offer.

“I had to say no; it was just too busy,” Wilkerson said at first. “I was concerned about my church, my family, the website (streaming).”

Wilkerson is pastor of Harvest Church UPC, which takes up a big chunk of his time. Another concern of being the sports person for the Chronicle would be taking pictures. This would be next to impossible since he will be in the press booth doing play-by-play while live streaming the games. 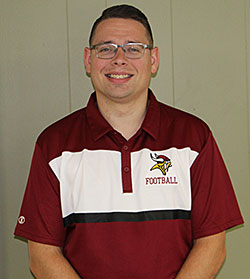 “I wanted to take the job but I had to figure out how we can do it,” Wilkerson said. “I had to find someone to take pictures. I had a couple of people in mind.”

Luckily for the Chronicle, Wilkerson reconsidered and found a way to make it work. He and the newspaper staff worked out an amicable plan to cover Humboldt sports. Wilkerson will enlist his friends to take pictures during the game. John Pilkington and Christian Branch, and possibly others will tag-team making sure sports pictures are taken during the games.

“We all sat down together to hopefully figure out a plan to make it work,” Wade added. “Seth told us what he could do while still performing his live streaming duties. He had concerns about covering all the games including junior high games.”

One dilemma was being able to attend basketball games. Basketball season is busy to say the least. There are typically two nights of high school games and two nights of junior high games each week. Plus, each night there is a girls game and a boys game. In the spring, high school baseball and softball have busy schedules as well.

Wilkerson, Wade and Chronicle General Manager Lee Ann Butler talked things out and ironed out a plan to have all sports covered.

When Wilkerson was asked how print sports coverage will be different from live broadcasts, he replied that he learned after writing his first article, you cannot write the way you talk on the air.

“In print, you have to paint the picture in writing. But, you have more time to think about what you write,” Wilkerson explained. “When broadcasting, it’s on the fly. People watch the video and see the action.”

Wilkerson got his first taste of sports coverage as a young lad. He and his brother Jared Wilkerson had fun announcing and doing commentary to Madden Football on the computer. He chuckled and said his parents even have video cassettes of them.

He got his first taste of real broadcasting Viking football games on the radio live in 2016. Wilkerson called on long-time broadcaster Stevie Ray Hemann for some pointers. Hemann has extensive experience in radio. At the time, the games were only on 1190 AM but soon after the station purchased a radio translator, which allow the same feed to be broadcasted on 99.9 FM.

Wilkerson enjoyed covering games and building relationships with school officials, coaches and players. With the shows doing well, the radio station decided to continue their coverage and added basketball games on air as well.

In 2017, the radio station added a new live show, Swap & Shop, weekdays at noon, and they added a Saturday morning sports show. A couple of years later, weekly news shows were added.

When 2020 arrived, Wilkerson wanted to expand football broadcasts by going live with video online. Viking News on Demand was born. Wilkerson talked with the Humboldt Booster Club and a partnership began. The Booster Club purchased two 4K cameras and games were streamed live on Facebook, YouTube and on VikingNewsOnDemand.com.

Coverage included football, basketball, and select baseball and softball high school games. With these being successful, Wilkerson added more programing to include Monday Night OT, which focuses on the Vikings and Lady Vikings, and a school news show on Thursday evenings at 7 p.m.

“I love covering sports,” Wilkerson noted. “Covering local sports you get to see how coaches aren’t just coaches. Some are like father-figures. I love watching players grow—watching them develop from year to year, from game to game.”

Seth and Kelsey have two children; Elyse is nine years old and Matthew is four. He grew up attending First United Pentecostal Church of Humboldt where his father, Jackie, was pastor. When his dad moved up in the church to a regional position, the church needed to find a new pastor. Shortly after, Seth was elected to pastor the church.

Wilkerson recently celebrated 11 years leading the church, now known as Harvest Church UPC. With his experience in radio and online, the church has its own online radio station, HarvestHumboldt.com.